Sulfuric acid is one of the most popular commodity chemicals in modern industry, and is extensively used in production of phosphoric acid. It is used in the cleaning of steel materials, due to its corrosive nature. Metal manufacturers worldwide are increasingly tapping into the avenues in the sulfuric acid market. However, its high corrosiveness and toxicity are factors due to which end users must exercise caution and safety parameters. The commercial importance of sulfuric acid can be gauged by the fact that its production has sometimes been seen closely related to the status of economy of countries. They are extensively used in phosphate fertilizers. They are especially used in the production of cereals. Thus, the growing utilization of sulfuric acid in agriculture industry has bolstered prospects of the sulfuric acid market. Strides being made by agriculture production in various parts of the world, such as in Asia Pacific, is boosting the market. A large share of revenue comes from the application of sulfuric acid in the agriculture industry, such as from China and India. Further, high growth areas are found in the chemical industry, as it is used as a commodity chemical around the world.

Modern chemical manufacturers are leaning on the contact process. Rising demand for sulfuric acid in the recovery of waste printed circuit boards is also boosting the market. Sulfuric acid has been extensively used in lead-acid storage batteries. Rising application areas of lead-acid storage batteries are expanding the horizon of the expansion of the sulfuric acid market. In recent years, players have been leaning on capacity expansion. They are also conducting research in improving the toxicity of sulfuric acid. They are also making efforts to improve the supply of raw materials.

Sulfuric acid is produced using two processes: contact and lead chamber. The contact process uses a vanadium pentoxide (V2O5) catalyst to produce a highly concentrated H2SO4. The contact process uses raw materials such as elemental sulfur and hydrogen sulfide in the presence of a suitable catalyst, primarily vanadium pentoxide. Sulfuric acid can also be recovered from spent acid generated in various chemical process industries. In the lead chamber process, sulfur dioxide is introduced with steam and nitrogen dioxide into large chambers lined with sheet lead where the gases are sprayed down with water and chamber acid having a concentration of 62% – 70%. Sulfur dioxide and nitrogen dioxide are dissolved, during which the sulfur dioxide is oxidized to sulfuric acid. The presence of nitrogen dioxide is necessary for the reaction to proceed at a reasonable reaction rate. 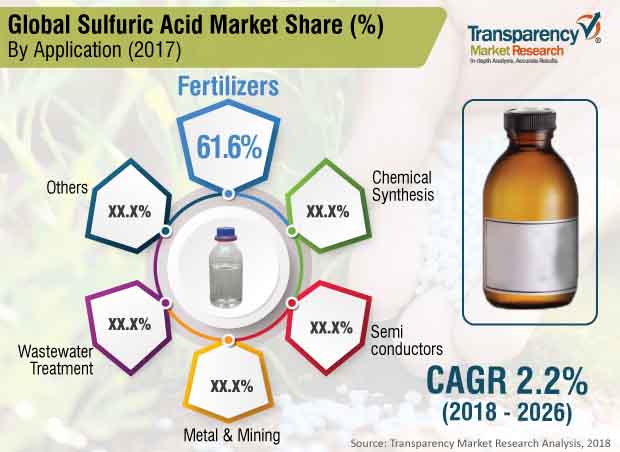 Demand for sulfuric acid is estimated to increase significantly in the near future due to the rise in the usage of the acid in fertilizers and other specialty and bulk chemicals such as nitric acid, hydrofluoric acid, and titanium dioxide. Demand for fertilizers, especially phosphate fertilizers, is anticipated to increase significantly due to the rise in production of cereals and oilseeds such as wheat, rice, cotton, and soya bean due to the growth in global population. Government subsidies for fertilizers and agricultural development in developing countries such as China, India, and South Africa is estimated to boost the phosphate fertilizers industry. Rise in global consumption of phosphate fertilizers is projected to propel the demand for sulfuric acid during the forecast period. However, volatility in prices of raw materials and crude oil during the forecast period is likely to hamper the sulfuric acid market. Recovery methods employed for regeneration of sulfuric acid and elemental sulfur are projected to create lucrative opportunities in the market during the forecast period. Usage of recovered products is expected to reduce the overall dependency on raw materials such as crude oil. This, in turn, is anticipated to boost the sulfuric acid market in the near future.