A range of benefits etched to solvent-based inks such as scratch-resistant, waterproof, fade-proof, and others are estimated to bring tremendous growth prospects for the solvent-based inks market during the forecast period of 2019-2027.

Solvent drying plays an essential role in drying solvent-based inks in the process of manufacture of packaging material. It is carried out at the converter’s end. The solvent drying method is essential to avoid the migration of retained solvent in the final packaging material into the product, as the latter may be harmful for human health and also impact the organoleptic properties of the product. 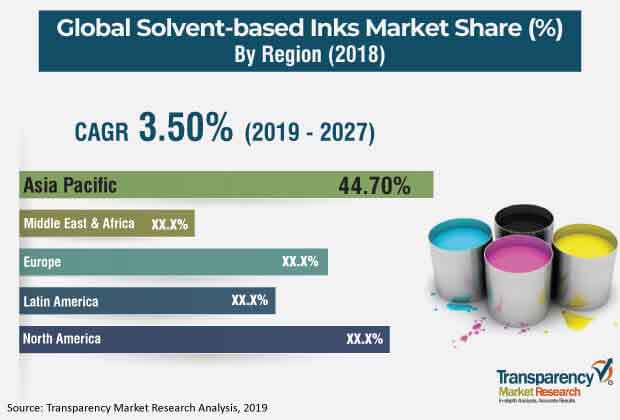 Solvent-based inks are primarily used for printing products that are to be employed outdoors due to their ability to adhere to non-absorbent materials. Solvent-based inks are fade proof, scratch resistant, and water proof; therefore, these are suitable for outdoor printing applications. Use of inorganic solvents and toxic metals such as cadmium, hexavalent chromium, lead, and mercury in printing inks has adverse effects on the environment.

Implementation of various government regulations that limit the use of solvent-based products such as inks, rise in concerns over shifting consumer preferences toward ‘greener’ alternatives, and the effects of global warming are the major factors restraining the solvent-based inks market.

The global solvent-based inks market has been segmented based on printing technology, application, and region. Based on printing technology, the global solvent-based inks market has been classified into lithographic, gravure, flexographic, screen-printing, letterpress, and digital. The lithographic segment held leading share of the global solvent based-inks market in 2018. It is widely used across the globe to print large-volume applications such as pamphlets, brochures, newsletters, business cards, catalogs, postcards, full-color books folders, leaflets, company profiles, stationery, and company brochures.

Based on region, the global solvent-based inks market has been segregated into North America, Europe, Asia Pacific, Latin America, and Middle East & Africa. Asia Pacific is expected to remain a highly attractive region of the global solvent-based inks market during the forecast period. International players have shifted their production facilities to countries in Asia Pacific owing to easy availability of raw materials and skilled labor, and low manufacturing costs.

The Safety Playground You Need For Online Poker Game