Power Management Integrated Circuit (PMIC) is an integrated circuit that helps manage power requirements of the host system. This IC type manages the flow of power from various power sources such as USB, batteries, and wall adapters, while maintaining the current limit. They are getting cheaper and smaller due to advancements in technology. Additionally, devices equipped with power management ICs tend to be smarter and more efficient, as they regulate the flow of power from in and out of the device. Therefore, demand for such devices is increasing rapidly. They find application in consumer electronics, automotive, industries, and telecommunication and networking. Inclusion of these in various devices has helped utilize power efficiently and extended the life of these devices. Power management ICs are expected to witness increased demand in the market in the near future due to the advanced features and developed technology. The global PMIC market is projected to expand at a CAGR of 4.6% during the forecast period and reach US$ 56.48Bn by 2026. 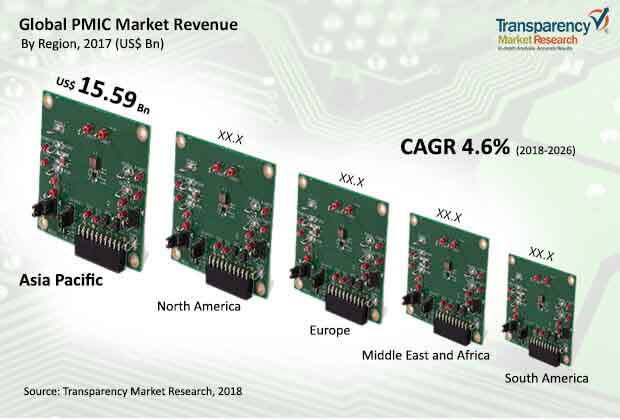 Power management ICs (PMICs) are developed for polymer/Li-ion battery-based applications and are used in portable devices such as smartphones, notebooks, tablets, media players, navigation devices, and handheld medical and industrial devices. Users can integrate these devices with the help of PMICs, into a car stereo directly with the help of plug-in cradle or USB cable. These further ease system development by integrating functions to applications such as touch screen support, power audio interfaces, backlighting, and coin cell backup supply switching & charging, and LED drivers. Therefore, portable consumer electronic products are estimated to witness consistent increase in demand in the near future. The PMIC market is likely to expand due to the increase in demand for such devices. The impact of this driver is projected to remain high during the forecast period. According to CISCO VNI, 11.6 billion mobile connected devices are expected by 2022. Furthermore, by 2022, the total number of smartphones are anticipated to be over 50% of global devices.

Another key driver contributing to the increased usage of PMICs is the rising demand for energy efficient products. There are several government policies to save and reduce energy consumption, energy emissions, or energy costs at an international level. Hence, several PMICs are incorporated in devices that monitor consumption of power and energy. Portable products which operate on batteries include these ICs for efficient usage of power. Therefore, the PMIC market is likely to expand due to the rising demand for energy efficient products. The impact of this driver is estimated to remain high during the forecast period. According to the International Energy Agency, in 2016, global investment in energy efficiency was approximately US$ 231 Bn, 9% higher than the previous year.

Amongst product types, voltage regulators are expected to consistently maintain their dominance throughout the forecast period. Voltage regulators are largely used in the electronic circuitry of a device. They are designed or used to automatically maintain voltage at a constant level and therefore are important for smooth functioning of digital electronic devices. Demand for voltage regulators is further increasing, as these ICs increase the battery life of handheld devices such as smartphones, tablets, and laptops. Therefore, they are increasingly finding applications in automotive, consumer electronics, industries, and telecom & networking, etc.

The rising inclination towards electronics and the growing demand for energy efficient products is prognosticated to aid in expansion of the global power management integrated circuit market. Power management ICs (PMICs) are produced for polymer/Li-particle battery-based applications and are utilized in compact gadgets, for example, cell phones, scratch pad, tablets, media players, route gadgets, and handheld clinical and modern gadgets. Clients can coordinate these gadgets with the assistance of PMICs, into a vehicle sound system straightforwardly with the assistance of module support or USB link. These further straightforwardness framework improvement by incorporating capacities to applications, for example, contact screen uphold, power sound interfaces, backdrop illumination, and coin cell reinforcement supply exchanging and charging, and LED drivers. Thusly, compact buyer electronic items are assessed to observe reliable expansion popular soon. The PMIC market is probably going to extend because of the increment sought after for such gadgets.

Auto makers and mechanical areas receiving voltage converters and controllers are key elements impelling the extension of the worldwide PMIC market. World over, there has been significant take-up of PMICs expanding battery life and decreasing power dissemination in a few of the reduced gadgets hitting the shopper markets. Throughout the long term, different arising purchaser markets have seen a flood of such gadgets. A huge drive for the business suggestion for PMICs originates from the multiplying deals of such shopper electronics, most eminently cell phones. Semiconductor gadgets with setup and programmable highlights are currently gaining popularity among electronics producers in different pieces of the world. A valid example is the development in ubiquity of field-programmable door cluster and frameworks on-chip semiconductor ICs.

Another key driver adding to the expanded use of PMICs is the rising interest for energy effective items. There are a few government strategies to save and lessen energy utilization, energy emanations, or energy costs at a global level. Consequently, a few PMICs are consolidated in gadgets that screen utilization of power and energy. Compact items which work on batteries incorporate these ICs for proficient use of power. Along these lines, the PMIC market is probably going to extend because of the rising interest for energy proficient items.

OPTIONS TO WORK AS A HOME TEACHER

What are the benefits of having GPS tracker for cars?

5 ways to tell that you’re an audiophile