The rapidly rising demand for portable barcode scanners in the retail industry is expected to fuel the demand for highly efficient photodiode sensors in the near future. Barcode scanning systems help businesses track a high volume of information. This, in turn, increases productivity and efficiency of these businesses. The key drivers for exploration of new optical detectors are success of the semiconductor technology and emergence of new applications (optical communication, optical sensing, etc.) that demand better properties, lower price, and miniaturization. However, certain factors such as poor temperature stability, higher operating voltage, and dark current temperature dependency of photodiode sensors are restraining the market.

Want to know the obstructions to your company’s growth in future? Request a brochure @  https://www.transparencymarketresearch.com/sample/sample.php?flag=S&rep_id=22478 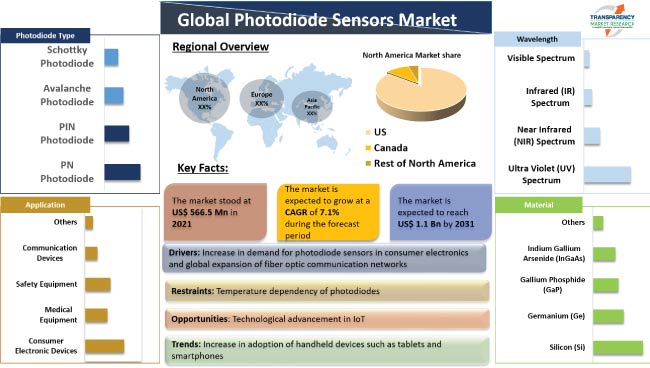 In terms of wavelength, the market has been classified into ultra violet (UV) spectrum, visible spectrum, near infrared (NIR) spectrum, and infrared (IR) spectrum. In 2017, the infrared spectrum segment accounted for more than 33% share of the global market. Furthermore, the segment is projected to gain market share during the forecast period, due to ongoing advancement in fiber optic communication that typically operates in infrared wavelength.

In terms of material, the global photodiode sensors market has been divided into silicon (Si), germanium (Ge), gallium phosphide (GaP), indium gallium arsenide (InGaAs), and others. The silicon segment holds a major market share, as these photodiodes feature high speed of response, high sensitivity, and low noise. A significant increase in the adoption of InGaAs is projected during the forecast period, as several applications requiring the detection of light with longer wavelengths are expected to deploy InGaAs photodiode sensors in the near future.

Based on end-use industry, the global photodiode sensors market has been segregated into telecommunication, health care, consumer electronics, aerospace & defense, and others (research, automotive, etc.). Consumer electronics and telecommunication segments are projected to hold significant market shares during the forecast period. The health care segment is estimated to gain market share during the forecast period, as several types of photodiode sensors are being incorporated in biomedical applications such as pulse oximetry, spectroscopic analysis, and medical imaging.

Geographically, the global photodiode sensors market has been segmented into North America, Europe, Asia Pacific, Middle East & Africa, and South America. Asia Pacific leads the global photodiode sensors market both in terms of revenue and volume, followed by Europe. The photodiode sensors market in developed regions such as North America and Europe is a comparatively mature market. The overall outlook for the market in Asia Pacific appears positive. The region is expected to hold a significant share of the global market during the forecast period, owing to prominent growth of major economies in the region as a result of investments and government initiatives to promote economic growth. The markets in Middle East & Africa and South America are expected to witness sluggish growth compared to other regions during the forecast period.

Why You Need to require a Website for your Business?

Understanding the difference between SSDI and SSI

Pharmaceutical Logistics Market Size will Grow Profitably in the Near Future