The global non-lethal weapons market is currently driven by growing adoption of advanced technology for the development of non-lethal weapons and demand for crowd control weapons to tackle protests and riots. Directed energy weapons such as Active Denial System (ADS) is a very effective non-lethal crowd control weapon suitable for deployment in unstable mob hit areas. Additionally, stun grenades, flash grenades, tear gases, water cannons, Long Range Acoustic Devices (LRAD) and others are being demanded by major regions. In 2017, the global non-lethal weapons market was valued at US$ 3,847.7 Mn and is anticipated to reach US$ 6,591.8 Mn by 2026, expanding at a CAGR of 6.3% during the forecast period from 2018 to 2026.

There has been a significant increase in protests and political instability over the last decade. Various countries across the globe have seen some major uprisings and social instability. In order to control crowds, governments are employing non-lethal weapons, which do not cause any threat to human life while controlling turbulence and law breaking. Demand for non-lethal weapons has increased to cope up with these challenges, and it is expected to boost this market over the forecast period. 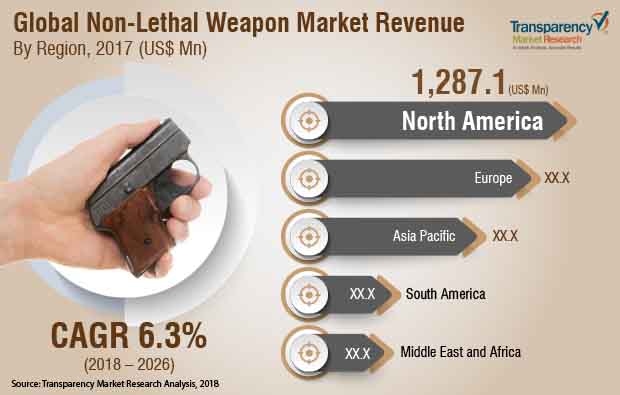 The market for non-lethal weapons is expected to grow during the forecast period with the advancement in technology and increasing number of manufacturers of non-lethal weapons. With the development of alternative types of weapons, technology has played a crucial role in the growth of the non-lethal weapons market. Advances in various scientific fields, such as chemicals, electronics, electromagnetic, computers, and acoustics are producing new opportunities for weapons development. These technological developments provide accuracy in serving various tactical and strategic military tasks without increasing their destructive power. Technologically enhanced weapons help the military and law enforcement agencies to perform their operations effectively and reduce collateral damage without compromising on safety. Newer technologies include high-power microwave weapons capable of disabling unprotected electronic systems, advanced portable lasers for use against sensors and personnel, as well as chemical and biological agents capable of lowering the performance of equipment and/or attackers. Product innovation has also improved due to the various government policies and contracts related to the procurement of advanced weapons for various military and law enforcement requirements. The market for non-lethal weapons is expected to surge due to these factors.

There has been a critical expansion in fights and political unsteadiness in the recent past. Different nations across the globe are witnessing some significant uprisings and social chaos. To control swarms, governments are utilizing non-lethal weapons, which don’t make any danger human existence while controlling choppiness and law breaking. Interest for non-lethal weapons has expanded to adapt up to these difficulties, and it is projected to aid in expansion of the market in the coming years.

With the improvement of elective kinds of weapons, innovation has assumed a significant part in the development of the non-lethal weapons market. Advances in different logical fields, like synthetic compounds, gadgets, electromagnetic, PCs, and acoustics are creating new freedoms for weapons improvement. These mechanical advancements give exactness in serving different strategic and vital military assignments without expanding their ruinous force. Mechanically upgraded weapons help the military and law requirement offices to play out their tasks successfully and diminish inadvertent blow-back without settling on wellbeing.

Fresher advances incorporate high-power microwave weapons fit for impairing unprotected electronic frameworks, progressed convenient lasers for use against sensors and staff, just as synthetic and organic specialists equipped for bringing down the presentation of gear or potentially assailants. Item development has additionally improved because of the different government arrangements and agreements identified with the acquisition of cutting edge weapons for different military and law authorization prerequisites. The market for non-lethal weapons is relied upon to flood because of these variables.

Five things you must know about Rabee Bazlamit: A Palestinian born prodigy who is...