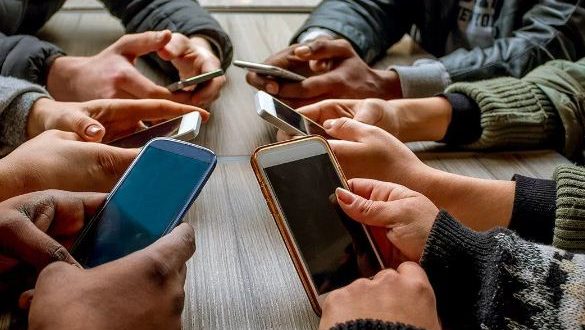 Another non-literary word which is often used instead of mobile phone addiction is nomophobia. A nomophobia is a disease which is developed by the excess use of mobile phone devices in the state of nomophobia a person builds up fear in himself. The concern is solely against that any mobile phone device which he is using will be snatched, detached or separated from him. The Statistics that were used before the quarantine are now increasing.

The orders of the emergency protocol have been issued by most of the states; that they have to put themselves in complete isolation in which their free movement is being restricted. Now they are not able to freely go to their work, in educational schools and institutions, to socialize with their friends, family members and relatives. For such reasons they had started to use mobile phones devices more than necessary, they had also found a new way to compensate all their activities through mobile phone devices because they know these devices are way more productive. In 2022 3.5 billion people started using smartphones as the ratio has increased to 0.3 by the year 2019. And the fact is the new corona-virus was started to spread actively by the same year. Furthermore, most of the Mobile Mall is offering their online services during the quarantine as the market is producing most of the revenues as it used to be.

Comparison between Statistics before and after quarantine

A long time ago, few of the people were able to use mobile devices. The downfall in rates of mobile phones; in different brands such as Xiaomi Mobile Phone Prices. They have enabled every group of people to get it. It’s recorded that almost 50 % of the parents in every region believe that their kids are mobile addicted just after the state of quarantine. They had double the use of mobile as they aren’t going to school. Moreover, they are getting their online classes on electronic devices like mobile phones and laptops. The same thing is for adults as 80% of them use their mobile phones at night time furthermore they check their phones around forty times a day.

A thing to be concerned

Brain functionality, sleep patterns, and other daily activities of peoples are changing due to quarantine and mobile phones. The use of mobile phones has continuously been increasing due to corona-virus throughout the world. The time period of calls over the phones has grown too, people are using social media platforms excessively, though they have the reason. Furthermore, cell phones emit radiofrequency radiation or radio waves; these waves are believed to be non-ionizing radiation which means everybody besides the antenna which generate the waves is liable to absorb such energy. By absorbing such non-ionizing radiation could lead to severe discomfort in the form of diseases like Brain Tumors, cancer and Male Infertility. And for those who are already suffering, they usually complain about depression, distress, state of fear, and great panic.

Nowadays most of the mobile phones usually have 50000 MAH batteries which are considered as average, which in real terms means one can use it fifty hours straight. By June 2022 another smartphone is about to launch which claims to have the highest battery life of 10000 MAH. This ultimately means a threat to the community or the whole of humanity.