The growing threat of national security due to rise in number of illegal migration, is one of the primary drivers aiding to the growth of the global military biometrics market. The increase in the number of illegal migration affects the growth in economy as the people residing illegally are not liable to pay any form of taxes to the government. This is one of the primary concerns for restricting illegal migrations. Furthermore, another issue that can be linked with illegal migration is the fear of terrorism. According to the U.S. department of defense, 30,000 illegal migrations were reported in 2015 which belonged from countries linked with terrorist activities. The use of biometric authentication helps in identifying individuals entering the country. Hence the demand for biometrics in defense applications is expected to grow significantly during the forecast period. 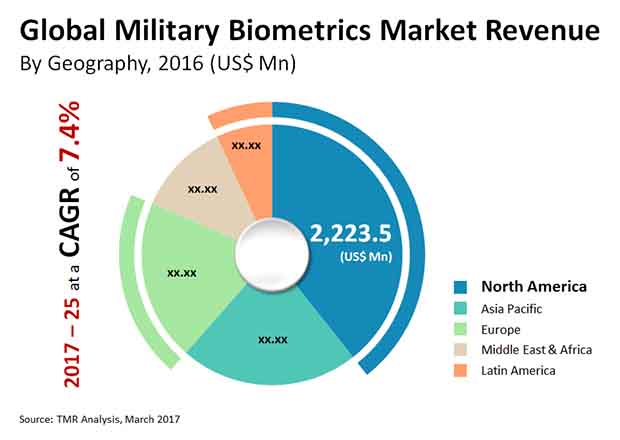 By geography, the global military biometrics market has been segmented into North America, Europe, Asia Pacific, Middle East & Africa and Latin America. North America and Europe together held more than 55% of the global market in 2016 and expected to remain dominant during the forecast period. North America has been anticipated to be the largest market in global military biometrics market. The growing concern for illegal migration in the U.S. is expected to drive the demand for military biometrics in this region. Asia Pacific held the second largest market for military biometrics. The region has also been analyzed to be the fastest growing owing to the presence of developing nations such as India and China who are increasingly adopting the biometric authentication in defense to upgrade their security measures.

Europe held the third largest market during the forecast period. The leading countries in Europe include Germany, France and the U.K. who are focusing on upgrading their defense capabilities by upgrading their authentication systems. Furthermore, the countries are also trying to restrict the entry of illegal migrations from under developed nations. Middle East and Africa region is also expected to witness steady demand for military biometrics owing to the presence of countries such as Saudi Arabia and U.A.E. which invest significantly to upgrade their defense and security. Furthermore, this region also includes countries like Iraq and Syria which are witnessing constant terrorist activities. Latin America holds the smallest market share and is expected to witness sluggish growth owing to the weak economic conditions of the countries present in this region.

The increasing demand for combating terrorism have propelled various nations to adopt the latst and most advanced form of biometrics for use in military applications. This is expected to promote the growth of the global military biometrics market in the coming years. With developing requirement for tending to penetration and comparative security issues, it has gotten most extreme critical to embrace military biometrics. The developing number of countries battling with manufactured characters, personality burglaries, and unlawful settlements will prod an uplifted interest for military biometrics. An ever increasing number of air terminals and lines across nations are utilizing biometrics confirmation frameworks in an offer to diminish illegal intimidation and fear assaults.

On the contrary, the intricacy of military biometrics frameworks could be a test. The significant expense may likewise be a hindering variable for enormous scope reception. Moreover, the establishment of these frameworks is confounded and requires gifted faculty. The way that it includes security of exceptionally private information, requires for the framework to never be undermined and as this framework can’t be reset effectively, it is a major factor for diminished appropriation. Nonetheless, the persistent innovative progressions in this field are assessed to diminish the effect of this limitation.

Some of the key players of the global military biometrics market include HID Global Corporation, Fulcrum Biometrics LLC, BIO-Key International, Inc., Aware, Inc., Safran Identity and Security, NEC Corporation, M2SYS Technology, Crossmatch, 3M Cogent, Inc., and others. The key strategies adopted by players include merger and acquisition, collaborative agreement, joint ventures, and others. Apart from this, major investments in research and development, and quality testing will help players gain a competitive edge in the coming years. Regionwise, the market is dominated by Europe and North America on account of the increasing emphasis on illegal migration in the developed nations such as the United States. However, the market in Asia Pacific is prognosticated to witness notable growth rate in the coming years owing to the increasing adoption of biometric authentication in emerging nations such as China and India.

Organ Preservation Solutions Market projected to expand at a CAGR of 10.5% from 2019...