The interactive kiosk market in North America is mature and is the second-largest market globally. North America witnesses a significantly high number of non-cash transactions and this number is increasing owing to a surge in the use of interactive kiosks and ATMs. The U.S. dominates the interactive kiosk market in North America. In the U.S., as per the Diary of Consumer Payment Choice Report 2015 and 2018 by Federal Reserve, the market share of cash transactions have decrease to 30.0% in 2017 whereas share of debit and credit cards have maintained a market share of 45.0-48.0% between 2015 and 2017. 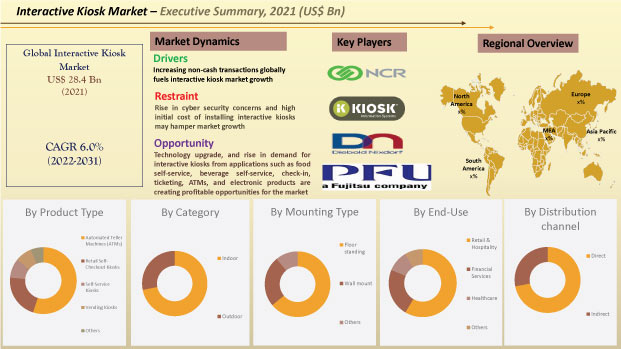 China is a prominent market for interactive kiosk in Asia Pacific, followed by Japan and India. In terms of ATM volume, China is a major market and accounts for more than 75.0% share of the global ATM market. India is also a prominent interactive kiosk market and demand for ATMs is increasing in India. In both China and India, rise in millennial population, increase in penetration of digital technologies, and government initiatives for financial inclusion are boosting the number of banking consumers. Consequently, banks are introducing ATMs in order to serve this large pool of new consumers. Japan is a major exception to this trend, as the number of ATMs has declined in Japan, as the cost and maintenance of an ATM in the country is higher than the fee it generates. The number of ATMs is expected to rise in other countries in Asia Pacific also, such as Myanmar, Bangladesh, and Pakistan.