Home News Intelligent Transportation System Market is projected to surpass US$ 60 Bn by... 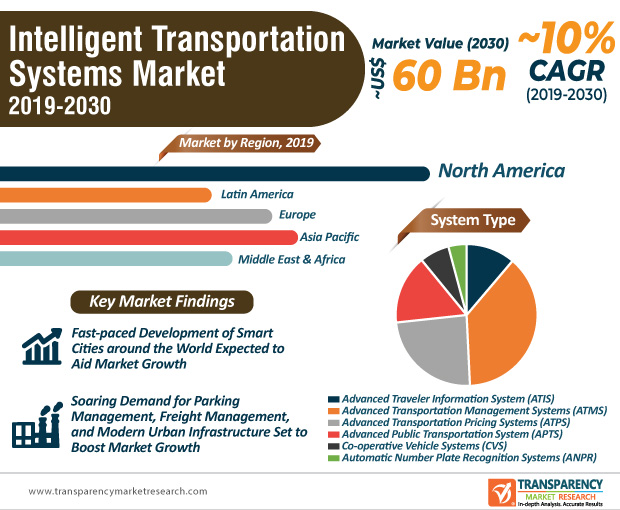 According to the report, the global intelligent transportation system market is projected to surpass US$ 60 Bn by 2030, expanding at a CAGR of ~10% during the forecast period. The global intelligent transportation system market is estimated to expand at a CAGR of ~10% and surpass US$ 60 Bn by 2030 driven by the urgency to develop transport infrastructure in order to cope with increasing traffic congestion in urban areas across the globe.

Countries such as Japan, the U.S., the U.K., and Germany represent developed markets for ITS. Most ITS technologies are first developed, implemented, and tested in these countries. ITS helped these countries to improve efficiency of their existing transportation networks, reduce fuel consumption, and number of road accidents. ITS, with their benefits, have gained popularity in South Korea, Singapore, Australia, and several other countries across the world. India, China, Brazil, and Russia are emerging markets and increasingly investing in ITS solutions to support economic growth.

The urbanization of developing countries and growing prosperity among people residing in urban areas are boosting the demand for private & public transportation. More than 55% of the population resides in urban areas, and the UN estimates the figure to rise to 68% by 2025. Road traffic and congestion is straining the transport system, which, in turn, is driving the need to adopt ITS. Developing regions such as Latin America and Asia Pacific have rapidly dealt with lack of proper city planning. As a result, the transportation system is witnessing high congestion and adding to traffic woes. It has, thus, become a need for developing countries to adopt ITS.

Trends in digital marketing for 2022: what you can not miss

Zero the Kidd “Face of the new generation”

Wrist Replacement Market : Projection of Each Major Segment over the Forecast Period 2022