Given the chances of such occurrences, manufacturers have realized and come up with various foot safety protection programs pertaining to machine maintenance, training, inspection, selection, and fit testing so as to protect workers from such foot injuries at various industrial setups. These foot-related safety programs mandate manufacturers to stick to the stringent safety norms as set out by the programs and thus save lives of workers and surplus expenses of the employers. It also reduces or does away with the loss of production time, medical expenditure, and compensations to workers arising out of such situations. These benefits are likely to widen the scope of growth of the global industrial protective footwear market in the near future.

There has been a trend of shifting production facilities from various developed nations to developing countries like India and China. Various favorable conditions, such as low cost of raw materials, labor, and less amount of capital investment than developed regions of Europe and North America have spelled boon for the countries like India and China. In addition to that, governments in these countries are offering financial incentives, such as preferential tax rates for setting up of various manufacturing sites, including protective footwear. Such flourishing business in the Asia Pacific region is likely to add to the growth of the global industrial protective footwear market in the years to come.

However, the ongoing global pandemic, Covid-19, has led to sever demand-supply gap in the market. China being one of the prominent manufacturers of such protective footwear has suffered a blow with worldwide lockdown and restrictions to contain the spread of coronavirus. The market is anticipated pick up after the arrival of a vaccine or a drug for the treatment of coronavirus 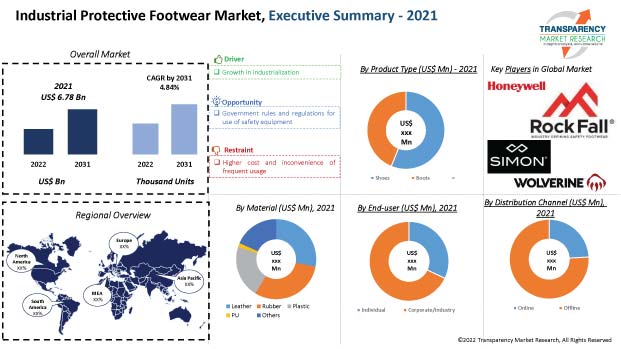 Asia Pacific has the largest population in the world. It also has the largest number of labor and contract workers in the world. The number of work related deaths are also highest in the region. According to ILO and Workplace Safety and Health (WSH) Institute, Singapore, Asia Pacific has the largest (almost two-third) work related mortality in the world.All these factors are prompting governments in the region to implement laws related to the safety of their workers. In India, the Factories Act, 1948 protects the health and safety of workers. Rising awareness about occupational safety and increase in industrial safety regulations is increasing the demand for industrial protective footwear in the region. Asia Pacific offers significant opportunity for growth of the global industrial protective footwear market, thus increasing the demand for industrial protective footwear across the globe.

Global Halloumi Cheese Market to Surpass a Valuation of Over US$ 900 Mn by...

Choosing a Career in Cyber Security

Impact of Outbreak of COVID-19 on Protein Crisps Market