The global hazardous area sensors market is characterized by the presence of a few large and experienced players such as Honeywell International Inc., ABB Group, and Siemens AG, which presents a huge barrier to new entrants. These established players already have a stronghold on the global market, with stiff competition between them. Transparency Market Research identifies security threats as the major challenge for all existing players and finds that companies have been devising improved products with better security features.

“Product innovation and development is a key strategy adopted by most leading market players,” the lead author of the study finds. “In order to survive stiff competition in the hazardous area sensors market, companies are involved in research and development activities to create innovative products.”

Honeywell International, for instance, expanded its portfolio of hammer union/wing union pressure sensors in April 2016 with the addition of the IEC Ex/ATEX certified Model 343 to its already existing 435 and 437 models. 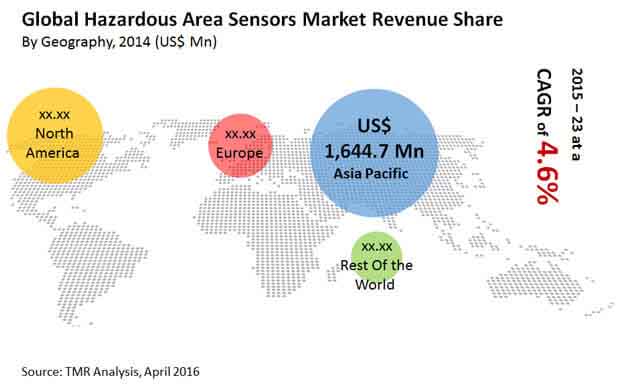 The rising importance of intrinsic safety has positively influenced the growth of the hazardous area sensors market, TMR states. Intrinsic safety is a globally recognized and widely accepted technique of low-energy signaling at a hazardous location, thereby preventing the occurrence of explosions. The acceptance of this concept in present-day manufacturing facilities in oil refineries, textile mills, paint manufacturers, and chemical plants has strongly driven the market and the impact is anticipated to be high toward the end of the forecast period.

“In addition to the growing prominence of intrinsic safety, the implementation of stringent government legislations across the globe has compelled companies to make use of hazardous area sensors,” the author of the study observes. Countries such as the U.S., the U.K., Germany, Canada, France, Austria, Switzerland, and the Netherlands have set up specific standards, certifications, and ratings for sensor safety.

Despite holding a minimum share in 2014, the hazardous area sensors market in the Rest of the World is anticipated to register the fastest growth rate from 2015 to 2023. This segment is projected to be fueled by the oil and gas as well as the mining and metal industries. Several countries in RoW, such as Brazil and South Africa, have been emphasizing on intrinsic safety in the industrial sector. As an increasing number of countries follow this trend, the hazardous area sensors market is likely to receive an impetus during the forecast period.

Increased Use of Hazardous Area Sensors in Oil and Gas Industry

What is The Easiest Class to Play in TBC Classic for Beginners?