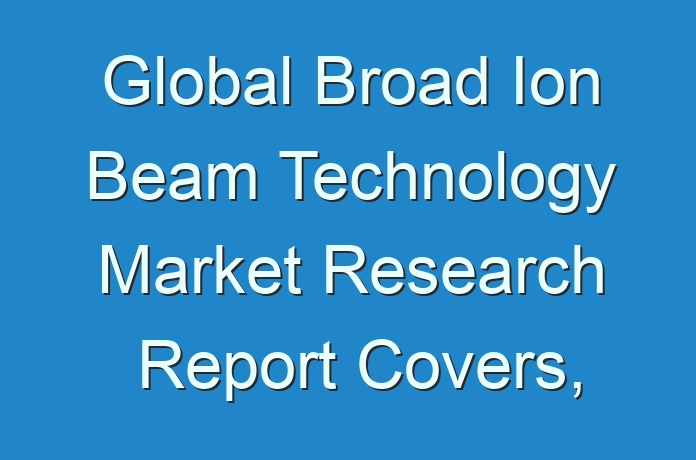 The global broad ion beam technology market was valued at US$ 211.61 Mn in 2018 and is anticipated to expand at a CAGR of more than 8.0% from 2019 to 2027. Ion beam technology is a technologically advanced method which is being primarily used across material science and semiconductor industry and also progressively used in the biological field for the purpose of ablation and deposition of materials as well as for site specific analysis. Broad ion beams are being used for the purpose of conventional ion etching, thinning, polishing, depth profiling, and cutting. In broad ion beam applications, additional ion beam polishing steps is used for the purpose of polishing of the slope or selective etching to reveal the internal microstructure not only of the slope cut but also of the sputtered region and initial surface. Increasing demand of broad ion beam in multi-step processing for 3D investigation of microstructures is expected to drive the market during the forecast period.

Broad ion beam market is mainly driven by the lower cost of fabrication using broad ion beam milling. Broad ion beam milling is another type of ion beam lithography which uses low energy noble gas ion beams like argon and helium. Broad ion beam milling techniques are being widely used for the purpose of re-shining samples for transmission electron microscope. Moreover, increasing application of broad ion beam in nano machining is also predicted to create a better opportunity for various broad ion beam equipment manufacturers in the coming years. Powerful and large ion sources are the main component in case of neutral gas injectors for the fusion devices. Moreover, the broad beam ion sources are being used for the electrically powered spacecraft propulsion. The most important factor retarded the demand may be due to the operational complications. Disproportionate ion beam current is also objectionable since it leads to a rapid wear of accelerator grid, increases the target impurity, and very little or no increase in the process rate.

Globally broad ion beam technology market on the bass of geography is segmented into North America (U.S, Canada, Rest of North America), South America (Brazil and Rest of South America), Europe (Germany, U.K., France and Rest of Europe), Asia Pacific (China, India, Japan and Rest of Asia Pacific), and Middle East & Africa (GCC, South Africa, and Rest of Middle East & Africa). Among these regions, North America held the leading market share in 2018. Within the region, the market is likely to witness lucrative prospects in the US. It is important to note here that a major share of applications in North America is catered by the deposition segment. Also the rising focus on research and development among prominent broad ion deposition equipment manufacturers domiciled in the region will enable the North America market exhibit strong growth in the coming years. Besides US, Canada offers attractive growth opportunities to the broad ion beam technology market in North America.

China Cedar Wood Oil Market is Expected to grow rapidly in the...