Petrochemical-derived products such as carbon black, solvents, resins, mineral oils, and intermediates are used as key raw materials in the production of flexographic inks.

Flexographic printing is an important printing process used in flexible package printing. Its popularity can be attributed to its high versatility in terms of printing on a wide range of substrates. Flexographic inks exhibit high adherence to the substrate surface and offer excellent printing quality, irrespective of the material of the substrate. 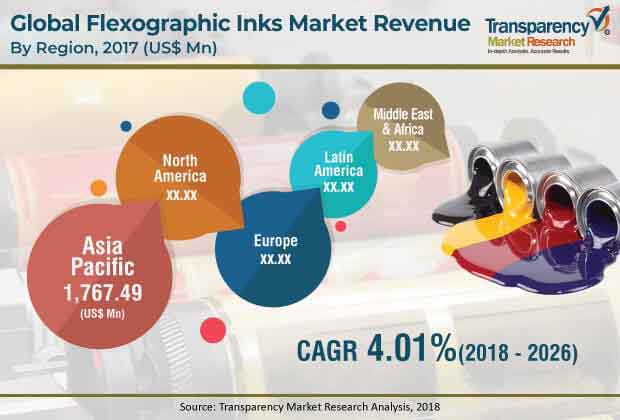 Packaging is considered a highly important aspect of marketing, which influences the consumer’s purchasing decision. The packaging industry is a major consumer of printing inks. Growth of the food & beverages sector and increased demand for flexible packaging from the health care sector are expected to boost the demand for flexographic inks in the next few years.

On the other hand, UV-cured inks do not contain any volatile compounds and, therefore, they are used in various printing applications such as gravure, inkjet, and flexography printing. They offer several advantages over the conventional printing inks. Demand for VOC-free printing inks is gaining momentum, due to increased number of regulations imposed on the usage of inks emitting VOCs. Furthermore, strict monitoring of usage of toxic chemicals, which possess high vapor pressure at room temperature, and government investments in the renewable energy sector are anticipated to drive the demand for UV-cured flexographic inks in the next few years.

In terms of region, the global flexographic inks market has been classified into North America, Europe, Asia Pacific, Middle East & Africa, and Latin America. In 2017, Asia Pacific accounted for a major share of the global market. Rise in the demand for packaging in food & beverages and personal care industries to achieve better aesthetic packaging in Asia Pacific is expected to boost the packaging segment of the market in the region during the forecast period. China, India, and Japan collectively constitute a major share of the flexographic inks market in Asia Pacific. The market in the region is expected to expand at a more rapid rate than the market in other regions. Both North America and Europe are actively investing in the development and manufacture of VOC-free inks to comply with government regulations. Thus, the demand for UV-cured inks in these regions is expected to increase substantially in the next few years.

Polyurethane a Key Resin Segment of the Flexographic Inks Market

Milking Machine Market Boosting the Growth Worldwide at a CAGR of 8 % from...