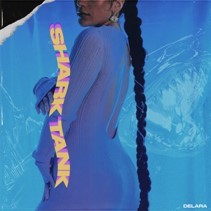 On her first single “Checka”, Delara teamed up with the Germany-based superstar Loredana. The song went straight into second place on the charts in Germany, was for a long time in the top five in both Germany, Austria and Switzerland, and has already reached a staggering 50 million streams across all platforms. “Checka” was a strong girl-power song about women in positions of power where men have always ruled before – wrapped in an RnB landscape everyone has not heard Delara in before.

Now she follows up with the single “Shark Tank”, which in the same way as «Checka» is about normalizing the idea of women in positions of power.

“At Shark Tank, the woman takes control of a relationship. She is not a woman who needs a man, but a woman all men need ”- Delara

The song is produced by Sondre Haftorsen (Jeremih, Ty Dolla $ign, Alan Walker). The song is accompanied by a music video filmed and directed by Karim Fakih, who recently had great success and a record breaker number of viewers with the short film «12 to 12». He has previously made music videos for artists such as 1 Cuz, Einar and Victor Leksell.

«Delara is my favorite artist in Norway. It has been a lot of fun to work with her and make a video that looks cool, in addition to having a strong message I also support »- Karim Fakih

“Shark Tank” is out on February 5th.

Strategic Insight into the Online Gambling & Betting Market, Forecast to 2030