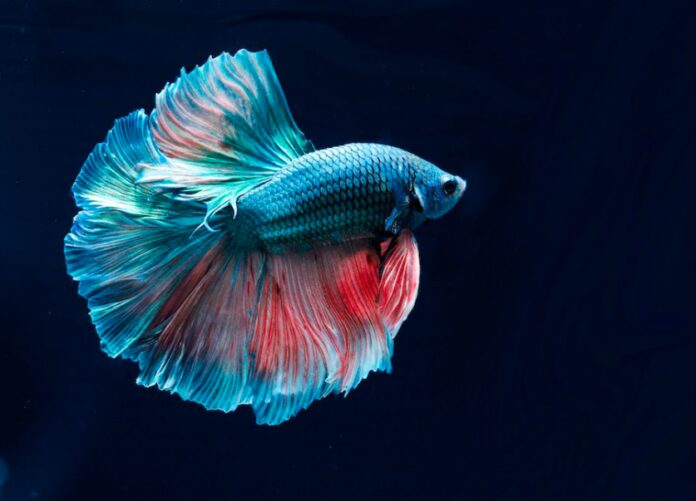 Betta fish fin rot is one of the most common problems among betta fish and other fish as well. Betta fish is a fighting fish and it feels great while watching your little fishy killing the water waves but when the little one gets sick and develops fin rot, it can not swim actively like before! Yes, that is a very sad and alarming situation.

However, fin rot or fin melt problem can be cured and there are several betta fungus treatments available that can make your betta fish healthy in few days or weeks!
People who have betta fishing their tank and it has developed fin rot problem, they are much concerned about it and even they ask is fin rot contagious? So, the answer to this question is No, fin melt or fin rot problem is not contagious at all unless the other fish in your aquarium has a weakened immune system.

Fin rot in Betta fish is caused by several of the reason and some of the main reasons are stress, bacteria in water, an excessive amount of food given to them and more than the required number of tank mates.

Betta fish is a Siamese Fighter Fish and is known for living alone, sometimes when we add more tank mates with a betta. It causes stress as the other mates and betta fish will fight with each other. Another main cause of the development of fin melt problem in betta fish poor quality of water. If betta feels stress for a long period of time, then its immune system gets weak and as a result, it develops fungus or infection

we should have a look at the main cause so that we could cure our bettas at the right time!

Fin rot or fin melt is the disease that has three stages, it propagates from mild to the severe stage very quickly. We need to identify this problem in our betta at the very early stage because if this will not be cured at the right time then it can lead to the development of columnar which will lead to attack the caudal peduncle and the body of the betta.
The fin rot problem can be detected by checking the

Symptoms of the Mild Fin Rot: The symptoms of the fin rot with the mild stage would be that the edges will develop a brownish color, they can be jagged, tips can turn into white color or you can also see some of the white spots on the fin.

Symptoms of the Severe Fin Rot: Fin rot at the severe stage exhibits some of the dangerous and scary symptoms, increased inflammation is one of the main signs when your betta fish has got fin melt problem of severe level. Other symptoms include red or bloody fin base, material like cotton grows on its body.
Betta Fungus Treatment

Fungus in Betta fish can be treated by many methods but the main cause of fin melt in bettas need to be cured so that the problem could not return in the future!
At first, you need to provide your betta with clean water, change the tank’s water on a daily basis. Remember, if you have not cleaned the tank yet, please shift your betta into any bowl for some time and thoroughly clean the tank. Take every decorative out of the tank and clean them, clean the tank and remove residue of the remaining food. Then add fresh and clean water, decorative into it. Then shift your betta fish back into its tank.

After you have followed every cure method mentioned above, now is the stage when you need to give some good anti-biotics to your betta. Treat your betta with a drug that is good enough to cure the gram-negative infection. Some of the effective drugs include

The most important methods to make your betta fish healthy and happy again is to consult an animal doctor as soon as possible! Yes, do consult one and treat your betta as prescribed. Remember that not discontinue the medication or the treatment before the recommended time duration by the doctor, otherwise, it can result in reoccurrence of the disease.

Aquarium Salt in one of the best option if you do not have access to your betta’s doctor for time being or you do not have medicine at home. Just treat your betta with the aquarium salt and he/she will start to get fine very soon, but do not forget to provide clean water.

Do not overfeed or underfeed your betta and this will help you a lot to cure him! Please examine the tank for remaining food, remove if any.

These are the methods which comprise Best Guide to Treat Betta Fish Fin Rot. You can buy. betta fish for sale listed online. Try these and you will observe speedy recovery in your little fighter fish. I’m sure these will help you a lot, as my betta also got sick once and I followed all the measures mentioned above and guess what? It made my betta healthy and happy in just a few days!