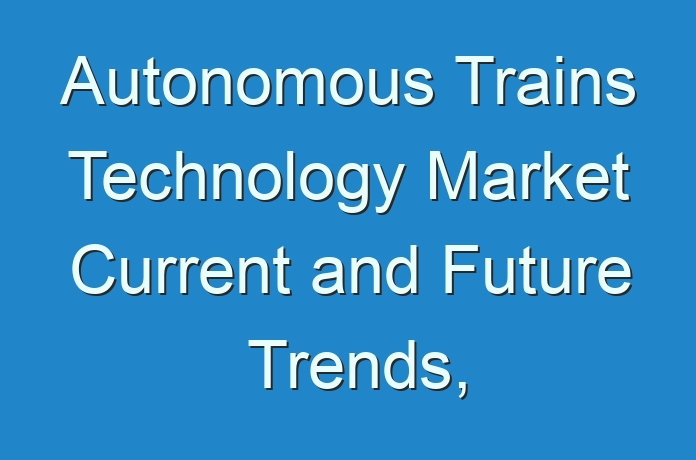 According to a new market report published by Transparency Market Research“Autonomous Trains Technology Market – Global Industry Analysis, Size, Share, Growth, Trends, and Forecast, 2017–2025. According to the report, the global autonomous trains market is projected to expand at a CAGR of 12.7% during the forecast period.

Railway transportation is considered as a highly reliable mode of transport, as it is least affected by different weather conditions. Railway transport is the least polluting mode, as compared to all the modes of transportation and hence, governing bodies prefer it. Autonomous cars are trending in the market, which are proving to be effective in reducing the number of accidents and fatal injuries owing to the incorrect decisions taken by the driver. Autonomous trains run and operate their components autonomously, based on the surrounding conditions and the data gathered from different servers. Currently, most autonomous trains functioning globally are only automatic; they are not completely autonomous. In these automatic trains, some operations such as train start stop, door operation, and emergency brakes function automatically under the surveillance of the train driver or attendant. Completely autonomous trains are unattended trains that function by themselves in coordination with data from servers and communication between trains running in parallel. 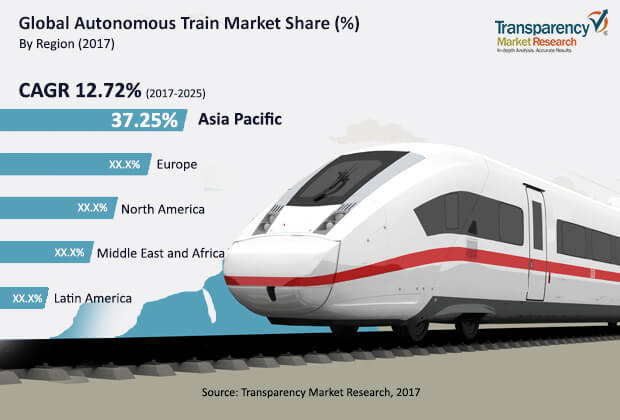 Railway transport is a well-managed mode of transport; however, the time required varies according to the traffic on the rail track. The number of train accidents has increased significantly in the last few years. In 2016, in Europe only, 1,787 train accidents occurred in which around 1,742 persons were killed or seriously injured. The numbers were 6% higher than that recorded in 2015. According to the International Union of Railways (UIC), in 2016, 52% of total train accidents were caused due to trespassing on railway infrastructure. 24% of accidents occurred at level crossings, and only 13% accidents were attributed to internal, technical, or organizational failure. Governing bodies are focusing on enhancing the level of automation and deployment of advanced safety technologies such as CBTC (Communication Based Train Control), ERTMS (European Railway Traffic Management System), and PTC (Positive Train Control) owing to the significant increase in number of train accidents. This, in turn, is driving the autonomous trains market. Implementation of advanced technologies such as CBTC and ERTMS, allows real-time train management and route planning, operating staff information, on board component status, and communication between trains running in parallel. Train accidents can be avoided by integrating these data with the train control module. Therefore, increased concern about passenger safety is driving the autonomous trains market. Demand for well-managed, punctual, and secure mode of transportation is increasing owing to rapid increase in urbanization and globalization. There has been a consistent rise in the number of passengers due to increased commutation for work. Additionally, trains being a time-saving and inexpensive mode of transport is fuelling the demand for autonomous trains, which effectively reduces the travelling time and ensures the safety of passengers boarding the train.

High cost of infrastructure installation, components, and technologies is a key factor restraining the autonomous train market. The rail industry being the lifeline in populated countries such as China, India, and Japan, have witnessed significant development in the field of automatic railways, thereby boosting the market in these countries.

Presently, completely autonomous trains are very few in numbers. Based on grade of automation, the GoA1 and GoA2 level segment dominates the autonomous trains market. GoA1 level trains comprise automatic train protection operation with driver, while the GoA2 level trains consist of automatic train protection, automatic train operation with driver, and automatic train cruising and stopping. Considering passenger safety, most high speed trains are implemented with GoA1 and GoA2 automation level. Metros are a fast and reliable mode of transportation. Automation in metro trains is increasing rapidly owing to the high volume of passengers transported by them. Infrastructure for monorails is being developed across the globe. Governing bodies are preferring to implement infrastructure with automation technologies. Therefore, the monorail segment of the autonomous trains market is anticipated to expand at a CAGR of more than 23% during the forecast period.

An autonomous train generally comprises a RADAR module, optical sensors and cameras, odometers, antennas, LiDAR modules, infrared cameras, and other components. LiDAR modules are more expensive than all other components. Therefore, it accounted for major share, in terms of revenue, of the autonomous trains market in 2016. The LiDAR module segment is expected to account for comparatively smaller share of the market, in terms of revenue, by 2025, owing to the projected decline of its price.

Japan and China have a significant number of high speed automatic trains. The rail industry in Japan has witnessed significant achievements and implementation of notable projects. Asia Pacific accounts for a prominent share of the global market primarily due to the presence of technologically advanced countries having strong foothold in the rail technology. The Government of China is focused on the adoption of autonomous trains across the country. Several new autonomous train projects are in progress and several are expected to be planned during the forecast period. India has also adopted autonomous trains and have begun numerous projects. Recent autonomous train testing positions India on the world map for significant development in the automated rail industry.  Considering the increasing demand from Pacific countries, India, and ASEAN countries, Asia Pacific is expected to maintain its leading position in the global market during the forecast period. Asia Pacific is followed by Europe in terms of global market share. Countries in Europe are technologically advanced and witness a higher rate of adoption of advanced technology. Consequently, Europe accounted for a major share of the global autonomous trains market.

Key players operating in the global autonomous trains market include, Alstom S.A., Hitachi Ltd., Bombardier Transportation, Thales Group, Siemens, Mitsubishi Electric, Ansaldo STS and CRRC Corporation Limited. Global players are emphasizing on the development of advanced technologies such as CBTC and PTC with the help of regional players and autonomous technology suppliers. These advanced technologies are rapidly changing the outlook of the autonomous trains industry. Bombardier Transportation and Thales Groups hold a prominent share of the autonomous trains market. Global players are focusing on research and development activities in order to advance toward more reliable and accurate technology and cater to the increasing demand for higher level of train automation and passenger safety.

Home Testing Products Market is Anticipated to Grow at a Steady Rate During the...