Automotive LiDAR (Light Detection and Ranging) is an advance scanning surveying technology that maps vehicle surroundings at the speed of light. LiDAR is the latest development in the automotive industry; an advancement in the predecessors of object detection technology such as RADAR (Radio Detection and Ranging) and ultrasonic. LiDAR determines objects or nearby vehicles by emitting light pulses, which reflected off objects and vehicles and create high-resolution images that provide a more accurate image of the surroundings than cameras or radar alone. Automotive LiDAR is considered as a key technology for completely autonomous vehicles, as it is capable of delivering high-definition 3D projections of the surrounding. Major auto manufacturers are leveraging automotive LiDAR as a precise technology in the race to develop safe and self-driving autonomous vehicles owing to its speed, accuracy, and versatility. Most notably, latest advances in automotive LiDAR further differentiate between a person walking or riding a bike, and even at what speed and in which direction the person is moving 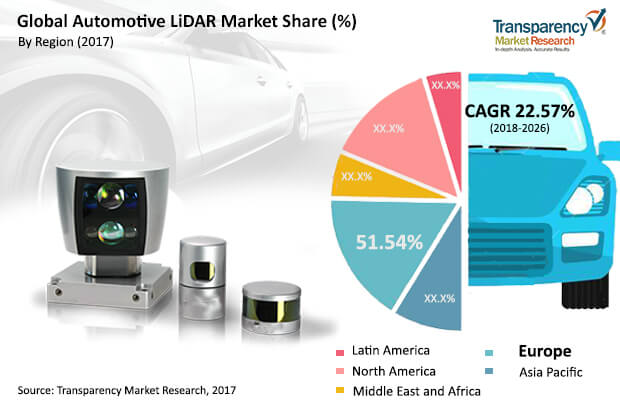 Request for a sample:
https://www.transparencymarketresearch.com/sample/sample.php?flag=S&rep_id=27497

Most road fatalities occur due to driver error. Increase in awareness about safety among vehicle users and global regulatory bodies to safeguard both passenger and vehicle safety, by minimizing accidents, is a prime factor that is likely to boost the automotive LiDAR market. The European New Car Assessment Programme (Euro NCAP) is prompting a few prominent modifications in the vehicle safety system in order to ensure safety. Furthermore, rise in adoption of autonomous vehicles is also projected to incorporate more active advance safety components such automotive LiDAR. Rising emphasis by governments toward vehicles incorporated with advanced driver assistance systems (ADAS) in the last few years, owing to safety concerns, is also estimated to propel the global automotive LiDAR market during the forecast period. Lasers emitted from the automotive LiDAR provide accurate and high precision detection for real-time and long range detection. Automotive LiDAR continues to grow as decisive technology for self-driving and autonomous vehicles. Manufactures of automotive LiDAR are focusing on reduction of cost by cutting down the laser emitters; however, they are still quite expensive and is anticipated to restraint the automotive LiDAR market during the forecast period.

Bumper and grill location is one of the most potential segment of the automotive LiDAR market. Placing of automotive LiDAR, especially solid state LiDAR, on the bumper and grill reduces the cost, as compared to mechanical LiDAR on the roof. Furthermore, the external appearance of the vehicle is not hampered and the LiDAR provides better navigation. Hence, it is projected to witness a significant expansion by 2026.

The others segment, which includes navigations, is a prominent application segment of the automotive LiDAR market. Navigation is the major application of LiDAR, which can survey the surroundings even in significantly bad climatic conditions. Additionally, the automotive LiDAR also provides real-time obstacle detection. This is expected to increase, as it is superior to its alternative of radar and camera.

In terms of image projection, the 2D segment accounts for a major share of the market owing to the high rate of adoption and easy availability. Increase in advancements in technology and rising research activity have led to the development of the 3D image projection LiDAR, which is estimated to expand at a significant CAGR, in terms of volume, in the near future. 3D LiDAR provides three dimensional projection of the surroundings, thereby leading to improved automotive LiDAR technology.

In terms of sales channel, the OEMs segment holds a larger share of the automotive LiDAR market, as compared to the aftermarket segment, owing to the rising awareness about sophisticated components among auto manufacturers. The aftermarket segment is also anticipated to expand at a considerable growth rate during the forecast period owing to increased testing of autonomous and self-driving vehicles. This, in turn, is providing lucrative opportunities to prominent automotive LiDAR manufacturers.