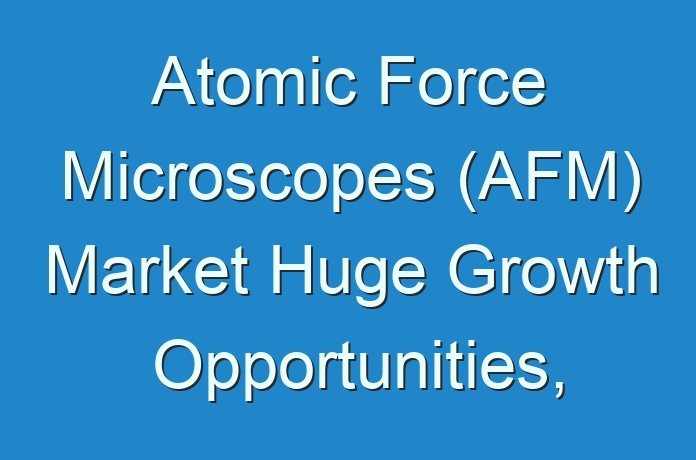 According to a new market report published by Transparency Market Research entitled “Atomic Force Microscopes (AFM) Market–Global Industry Analysis, Size, Share, Growth, Trends, and Forecast, 2018–2026,” the global atomic force microscopes (AFM) market is projected to expand at a CAGR of 4.9% during the forecast period 2018-2026. According to the report, the global market will continue to be influenced by a range of macroeconomic and industry-specific factors.

Life Sciences and Biology Segment to Remain Most Lucrative

Life sciences and biology is expected to continue to be the leading segment globally during the forecast period due to rising demand for high resolution and accurate microscopy. Life sciences and biology segment is projected to expand at the highest CAGR of 5.2% over the forecast period from 2018 to 2026 due to growing adoption of atomic force microscopes in the biology sector owing to the benefits that AFM brings to biology such as determining high-resolution structure, examining mechanical properties, and determining force interactions, all at the nano scale. Researchers are increasingly using AFM for ultra-high-resolution studies of proteins and DNA. The use of AFM is increasing in the biology and biomedicine sectors as it can analyze any kind of sample such as polymers, adsorbed molecules, films or fibers, and powders which have increased the growth of life sciences and biology segment across different regions of the world.

Semiconductors and electronics segment is projected to expand at a significant CAGR over the forecast period due to the growing popularity of smartphones and other electronic devices. The demand for AFM is also increasing for IC testing.

North America accounted for the highest revenue share in 2017 due to numerous technological advancements and growing investments in the semiconductor industry in the region. In North America, telecom operators are continuously taking efforts to introduce advanced technologies such as high resolution, single chip AFM and enhanced probe technology systems in order to achieve better productivity and accurate Nano scale measurements. In February 2017, Integrated Circuit Scanning Probe Instruments (ICSPI), based in Canada, a provider of scanning probe instruments, developed the highest resolution single-chip atomic force microscope (AFM) for different fields of science and technology. Furthermore, with the high demand for high resolution microscopy, various players in North America are collaborating with each other to provide various advanced microscopy solutions. This is helping the North America market to generate significant revenues.The market in the U.S. held the highest share in 2017 in North America and is estimated to expand at the highest CAGR during the forecast period. The market in North America is expected to expand at the highest CAGR of 5.7%during the forecast period. In a number of European countries, most semiconductor and electronics providers are offering technologically advanced microscopes for the food industry for illustrating mechanisms of property changes during processing and storage. The market in Europe is likely to witness significant CAGR growth over the forecast period. The U.K. contributed highest share to the entire Europe atomic force microscopes (AFM) market in 2017.

Demand for atomic force microscopes in APAC is likely to remain concentrated in China and India, owing to the growing technological innovations and popularity of conventional biological laboratories. India is estimated to expand at the highest CAGR among the countries in Asia Pacific during the forecast period due to the growing popularity of smartphones and growing adoption of advanced technologies. Growth in the semiconductor industry is also propelling the atomic force microscopes market in India. In Middle East & Africa (MEA), market players are increasing their investments to expand their physical presence. GCC countries are expected to expand at a significant CAGR during the forecast period, driving investments for the development of microscopy technologies in the region. In South America, Brazil is expected to hold a significant portion of revenue for the market in the region throughout the forecast period.