The market for controlled release fertilizers in Asia Pacific is witnessing an immense rise, thanks to the growing need for food. The rapidly increasing population in this region has fueled two important needs of humans, food and shelter, which has resulted in less arable land but more people to feed.

Farmers and agriculturists are using advanced products and specialty fertilizers such as controlled release fertilizers to heighten crop yields from the limited farming land available across Asia Pacific. They are also focusing on modernizing their farming methods to boost harvest with the help of these fertilizers in order to fulfill the ever-rising demand for food.

Over the coming years, the demand for controlled release fertilizers is expected to increase at a faster rate than conventional fertilizers in these countries. However, the lack of awareness regarding the benefits offered by these fertilizers and their high cost will limit their application in other regions, which is why they are likely to witness a moderate growth in their adoption in the agriculture and the horticulture sectors. 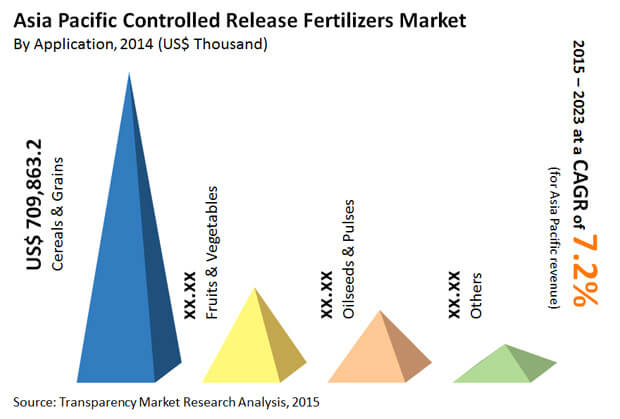 As cereals and grain are one of the most important parts of traditional diets in Asia Pacific – they hold almost two-third share of the overall calorie intake of an average Asian person – local farmers and agriculturists are being encouraged to uptake sustainable agriculture practices in order to increase their production with the efficient usage of specialty fertilizers such as controlled release fertilizers.

In 2014, the revenue generated by the application of controlled release fertilizers in cereals and grain attained a value of US$0.7 mn. Rising at a CAGR of 7.40% from 2015 to 2023 it is expected to reach US$1.3 mn by the end of the forecast period.

Strategic Insight into the Champagne Bottles Market, Forecast to 2030