Well, changing the old habits of cleaning your butt takes time. And, it is true not just in the United States but almost everywhere. Bidets are common in Asia and some parts of Europe. In recent times, it’s getting popularity in the U.S.A. too.

That being said, there are lots of misconceptions and other factors that contributed to its mass unpopularity. In this article, I will try to explain those in easy to understand terms and I will mention some reasons on why you should use a bidet instead of traditional toilets.

Reasons Why Americans Don’t Use Bidets

Modern heated bidets offer maximum cleanness and comfort. Yet you will find lots of Americans saying they can’t clean well and most importantly they think it’s not hygienic. The truth is most people don’t know how to use a bidet. Besides, you will find lots of historical data on the unpopularity of bidets among the Americans. Let’s see some of those reasons:

People who don’t like the idea of having a bidet don’t have clear information. They think it can’t clean them well. In reality, they never tried it before. They just read about it or heard about it. With this little information, it’s natural to loathe bidets.

If you do any reality check, you will find that bidets can clean better than the toilet paper without using your hand. The pulsating nozzles of any modern bidets are made in such a way that you can clean the region as you have never experienced before.

Talk to your neighbor who has bidets or talk to someone who visited Europe or South Korea, Japan, or any parts of Asia recently. Only they can explain the true beauty. Until you use it for the first time, you can’t see the truth.

Besides, bidets are self-cleaning. You don’t have to manually clean it after each use as you usually for traditional toilets.

Another misconception is less comfort. Well when you compare bidets with traditional toilets, the level of comfort is simply priceless. Now, let’s see why people think bidets are uncomfortable.

Coldwater. Yes, most people who have never used this think the cold water will be uncomfortable during the winter. This is simply not true. Almost all the heated bidet seats offer warm water.

The difficulty of usage is another misconception. Most people who don’t like bidets think it’s complex to use a bidet which is not true. I admit, the mechanism or the way a bidet works may sound scary, but once you know how to use it, it’s so simple!

It’s true, bidets are more expensive than traditional toilets. It’s almost twice the price. This is another reason why bidets are not vastly popular yet. But it’s a long term investment and over time, your money will pay off. Bidets come with lots of extra features that you would otherwise have to buy separately.

There are bidet seat attachments. You can use them with your traditional toilets. In that case, the cost will be much lower. 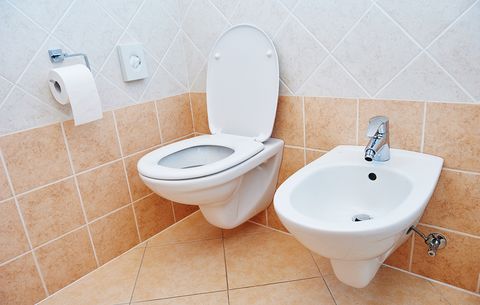 Bidets require an electrical connection to run. There is water and there is electricity – so, most people get scared when they think about it. But it’s completely safe and all the bidets must pass strict safety regulations. Besides, there are non-electrical bidets for you to try.

Americans are very much affectionate to their traditions. Even if it does not mean anything or it is outdated, they will keep doing things out of habit. Well, it’s both a good and bad thing. That’s why if you are from Asia or Europe, you will notice there is probably no bidet in the American bathroom.

Women particularly are concerned about their hygiene. They are often in doubt whether bidets can clean their regions without hurting. Well, with advanced technology like pulsating wash and multiple nozzles that can be adjusted – this should not be any trouble. Women can be more benefitted from bidets than males.

Why Americans Should Use Bidets?

As you can see from the above discussion, most concerns are basically due to the lack of proper information and fear of trying something new. Now, let’s see why Americans should use bidets instead of toilet paper:

Apart from prejudice and flood of misinformation, there is no reason why you should not use a bidet. It’s classy and brings elegant luxury to your modern bathroom. Without confusion, you should take advantage of this modern technology.

Mining Hoses Market will serve a demand to attract a revenue of US$483.4 mn...