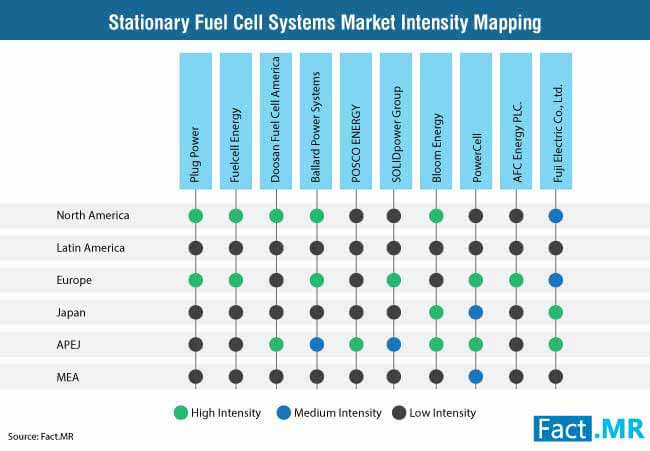 The study offers a holistic assessment on various market dynamics and macro and micro-economic factors that are influencing adoption of stationary fuel cell systems in various industrial verticals.

Combined heat and power (CHP) or cogeneration is one of the most common applications of stationary fuel cell systems, which accounted for the largest revenue share of over 45% in 2018, according to the Fact.MR study.

“CHP is one of the most commonly used stationary power generation systems installed to generate electricity as well as heat. In the modern days, fuel cells are widely used in the manufacturing of CHP, which acts of the leading driving force for the growth of the stationary fuel cell systems market,” said a lead analyst at Fact.MR.

“When stationary fuel cell systems are incorporated in CHP, it offers extraordinary benefits in terms of efficiency, sustainability, reliability, and cost-efficiency. As compared to conventional power generation methods, which commonly involve combustion engines, CHP is considered environment-friendly and highly efficient, which is boosting adoption of stationary fuel cell systems among CHP manufacturers across the world.”

For example, the U.S. Environmental Protection Agency (EPA) removed policy barriers for CHP projects in the region, and it is establishing partnerships with CHP stakeholders to provide them with necessary resources, tools, and policy information.

The positive growth environments for CHP applications in various regions is expected to generate most lucrative opportunities for players in the stationary fuel cell systems market. Consumers’ awareness and favorable regularity framework for CHP is expected to make it the most popular application of stationary fuel cell systems in the upcoming years.

According to the Fact.MR study, the APEJ region has witnessed the highest growth rate in the past few years, and accounted for over one third revenue share in the stationary fuel cell systems market in 2018.

Recently, Korean Prime Minister Lee Nak-yon proposed to make use of world-class technology to use hydrogen fuel cell in police buses, in order to engage more eco-friendly vehicles in the country.

As a result, the government projects a potential rise in domestic demand for emission-free vehicles, which will ultimately generate lucrative opportunities for manufacturers in the stationary fuel cell systems market.

In addition, Hydrogen Utility (H2U), an Australian infrastructure company, has proposed to establish a $117.5 million, hydrogen-fuelled electrolyzer plant in South Australia. The company received a $7.5 million loan and $4.7 million grant from the state renewables fund, which signifies favorable governing policies that are a positive growth environment for stationary fuel cell systems market players in the Asia Pacific region.

According to the Fact.MR study, the stationary fuel cell systems market will envisage a staggering 19.8% value CAGR during the forecast period 2018-2027.

Thermoforming Packaging Market: The US to Hold Nearly 22% Market Share by Value