The COVID-19 (coronavirus) outbreak has resulted in a slowdown of the global solar panel recycling market. China with the highest number of PV installations as well as production of solar PV panels is also expected to suffer. This phenomenon is anticipated to impact the global solar supply chain.

China is one of the leaders in renewable energy investment. However, the COVID-19 outbreak has paralyzed the power demand and generation, which could retard the growth of China’s solar panel recycling market. Moreover, the country is witnessing a wave of low capacity additions due to suspended manufacturing and construction works. As such, the market for solar panel recycling is estimated to reach an output of ~894,000 tons by 2027. Hence, companies in market landscape are considering for alternative sourcing avenues to stay afloat in the market. 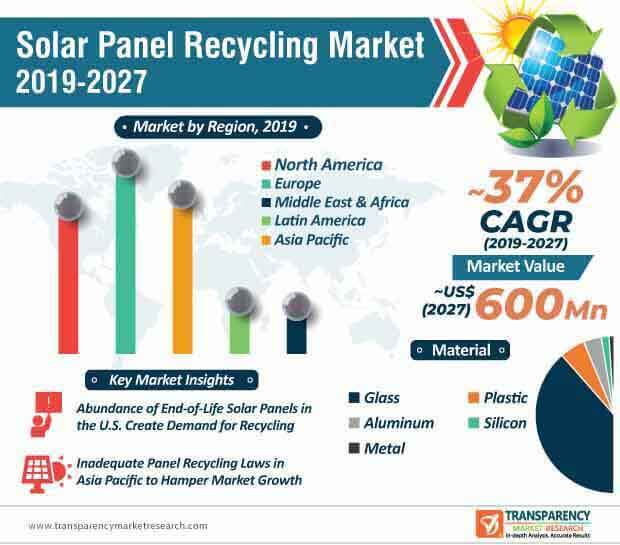 An increased number of end-of-life solar panels are creating a demand for recycling activities in the U.S. Moreover, analysts of Transparency Market Research (TMR) opine that the U.S. is anticipated to account for the highest number of end-of-life solar panels in the upcoming decades after China. Hence, companies in the solar panel recycling market are focusing on value-grab opportunities in the U.S. As such, the market is estimated to reach a value of ~US$ 600 Mn by the end of 2027.

Researchers are exploring new ways to extract silicon from discarded solar panels to repurpose it into Nano-silicon for batteries in the solar panel recycling market. For instance, in October 2019, researchers at the Deakin’s Institute for Frontier Materials, Australia, revealed that they are unearthing new ways to obtain silicon from waste solar panels by Nano-sizing it for use in lithium-ion batteries. Such innovations are boosting the recycling of silicon-based photovoltaic (PV) cells. This explains why silicon-based products are estimated to dictate the highest revenue among all products in the market for solar panel recycling. Hence, companies in the solar panel recycling market should collaborate with material scientists to repurpose discarded solar cells.

Though silicon semiconductors have a relatively small amount of silicon in solar cells, the material’s value is extremely high. Hence, companies in the solar panel recycling market are increasing efforts to extract silicon from PV cells to prevent the high-value material from going to landfills.

The Asia Pacific solar panel recycling market is one of the fastest-growing sectors worldwide. However, without concrete laws that ensure recycling of decommissioned panels, the region could be drowning in hazardous waste in the coming decades. Since solar panel recycling is still very expensive, research scientists are experimenting with new recycling processes. For instance, research scientist Dr. Li Xiaodong revealed that researchers at Singapore Polytechnic research institute are experimenting with new ways of recycling processes involving mechanical, chemical, and thermal treatment sans the need for harmful acids. These new methods are accelerating the recycling rates whilst companies can collaborate with researchers to gain competitive edge in the market landscape. 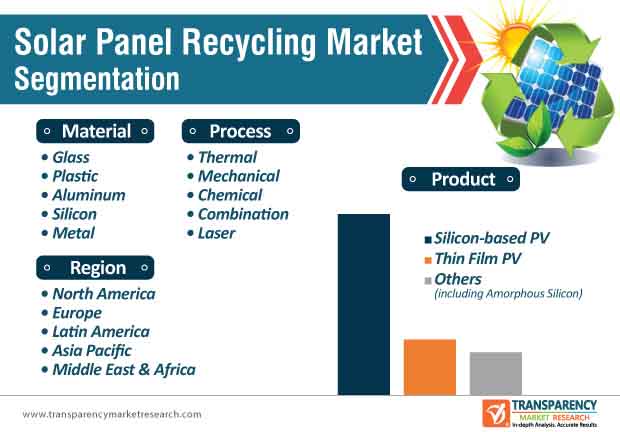 Stuck in a neck-to-neck competition with other brands? Request a custom report on Solar Panel Recycling Market

The solar panel recycling market is projected to advance at an explosive CAGR of ~37% during the forecast period. However, the unprecedented outbreak of COVID-19 is anticipated to impact the global solar supply chain, whilst companies in the U.S., India, and Australia look for alternative supply avenues using raw materials and other components, which were formerly secured from China.

Companies are leveraging incremental opportunities in the fast-growing Asia Pacific region. However, issues such as increased disposal costs and over capacitated landfills are likely to impede market growth. Hence, companies should tap into opportunities in Europe, since governments have established a reliable recycling infrastructure in the region and should collaborate with researchers to find new ways of economical repurposing of solar panels.

Get Best Alternatives for Torrent with Kickass Proxy