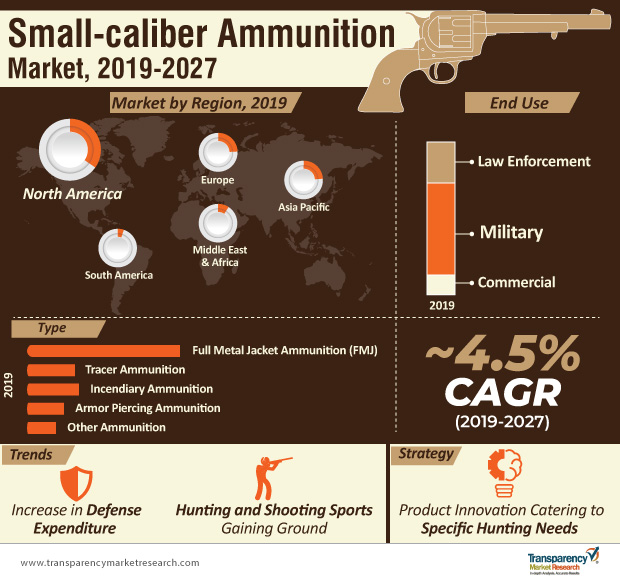 The incidence of issues around the world related to terrorism, wars, and armed conflict have created a continuing demand for ammunition, globally.  This has resulted in the recent global trend of increasing defense budgets by countries around the world, with the intention of boosting military strength, modernizing the armed forces, and procurement of modern equipment.

According to the Stockholm International Peace Research Institute (SIPRI), there has been a 2.6% rise in military expenditure around the world, for security and development interests. This is likely to have a direct impact on the demand for ammunition, thus driving the growth of the small-caliber ammunition market.

The global market for small-caliber ammunition reached ~US$ 5 billion in 2018, and its applications in the military industry accounted for ~two-third revenue share of the market. This trend is unlikely to change during the forecast period, even as the rate of growth for this period over the forecast duration is expected to be 4.5%.

The modernization of defense programs and upgrading & replacement of outdated equipment to incorporate technologically-advanced systems is important on the end use level, which is a major driver behind the increased demand for ammunition in the global market. Regional instability and conflicts in pockets around the world, especially in Asia Pacific, are likely to propel the growth of the small-caliber ammunition industry in the coming years.

The increasing use of guns in the commercial sector for both, hunting and sports has continued to fuel their demand steadily, globally. The use of firearms in the commercial sector also includes shooting sports using a variety of rifles and handguns. With a variety of shooting sport activities witnessing increasing popularity, the use of small-caliber guns has been gaining traction, which, in turn, has also encouraged the growth of the global small-caliber ammunition market with major players manufacturing specialized products for sports. Click here and check tools used for producing such ammunations.

According to the United Nations Office on Drugs and Crime, 464,000 deaths were caused by homicide in the year 2017, worldwide. Public safety concerns due to the rise in crime rates and homicides around the world is a very significant underlying trend that is influencing the growth of the small-caliber ammunitions market.

Law enforcement held the second-highest share of the small-caliber ammunition market as of 2018, and this trend is likely to continue for the duration of the forecast period.

Among the common options for small-caliber ammunition, full metal jacket ammunition continues to remain widespread, as these are manufactured for most types of rifle and handgun cartridges. Their reliability in the feeding process, effectiveness, and their main attribute of less fouling in the barrel, improving accuracy and smoothness, makes them a popular choice in small-caliber ammunition.

As of 2018, full metal jacket ammunition held more than half the global market share, and this trend is likely to continue through the forecast period from 2019 to 2027, with tracer and incendiary ammunition flowing closely.

Competitive Analysis of the Landscape

The landscape of the small-caliber ammunition market is fairly fragmented, with well-established and prominent players slowly being joined by emerging market players who occupy ~30% of the global market share. Some of the prominent players include – Northrop Grumman Corporation, Nammo AS, and General Dynamics Corporation, among others.

The global small-caliber ammunition market has been segmented based on type, caliber, end-use industry, and region.

Pneumatic Cylinder Market: To Register A Healthy CAGR For The Forecast Period 2019 –...

What are the benefits of email hosting