Remote electronic units are used in aircraft and spacecraft platforms, in a variety of applications such as landing gear, flight control surfaces, fuel systems, and ice protection systems. Due to increasing deliveries of aircraft, globally, and the rapidly expanding aviation sector, the aircraft industry is set to remain a significant end user for players in the global remote electronic unit market. In 2018, the aircraft platform segment held the largest share in the REU market, accounting for around four-fifth of the total market share by revenue, and is set to expand moderately to reach the ~US$ 2.8 Bn mark by the end of the forecast period of 2027.

The application of REUs in the maintenance of spacecraft, which accounts for a mere one-fifth of the total revenue of the market, is set to expand at a slow pace of ~3% during the forecast period. Recent years have seen phenomenal advancements in space exploration, with multiple companies developing advanced tech in the aviation industry in the race to get further than their competitors.  However, due to the sluggish pace of growth of this industry, its impact on the global remote electronic unit market is expected to be slow. 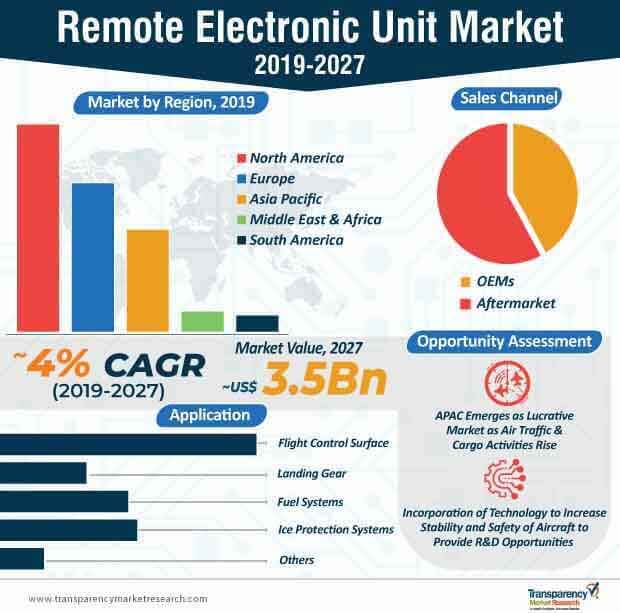 Fly-by-wire systems that replace conventional manual flight controls have been around since the first half of the 20th century in the form of analog systems, designed to increase the ease of control over an aircraft. They eliminate the complexity of the mechanical circuit of electromechanical flight control systems. Digital fly-by-wire systems that were developed as a step above analog systems, are being updated as a fast pace, as the demand for fuel-efficient aircraft and efficiency in flight control has become the focus of product innovation. The fly-by-wire systems that are being used now offer the benefit of performance reliability and safety, and increased efficiency of the flight under normal conditions.

With modern fly-by-wire systems evolving into intelligent flight control systems, this is set to have a significant impact on the further evolution of the global remote electronic unit market during the forecast years.

Due to the presence of a number of manufacturers in the region and its evolution as a marketing hub, North America accounts for a significant share of the global REU landscape – ~40% in 2018. While the market is growing at a considerably slower pace than other regional markets, it is expected to hit the ~US$ 1.4 Bn mark by the end of the forecast period. Also, backing this is the rise in the demand from both, the commercial and governmental sectors for remote electronic units, which has an indirect, positive impact on the growth of the market as well.

However, fastest to grow in the global REU landscape is the market Asia Pacific, at a value CAGR of ~4%, it is being anticipated to occupy one-fifth of the total market share by the end of 2027. Increased air traffic and expanding production in the region are likely to play a huge part in the growth of the market.