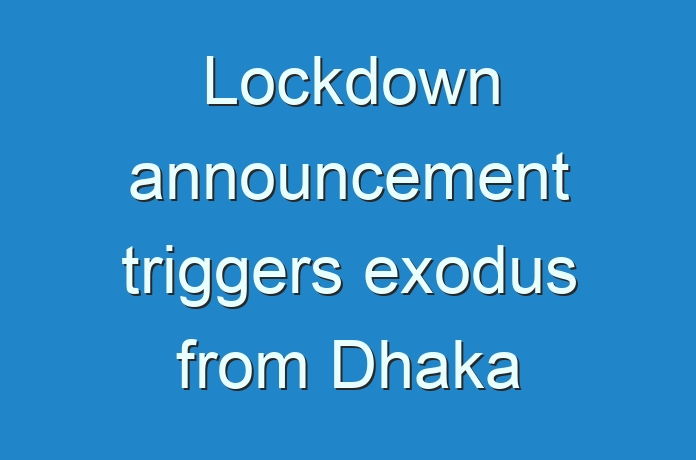 As Bangladesh prepares to go into hard lockdown from Monday amid the alarming rise in Covid-19 infections, people are rushing to leave Dhaka city in masses.

However, as long route bus services from the capital have been suspended since Wednesday, people on Saturday were suffering to reach their destinations.

Spot visits to Dhaka’s Gabtoli and Mohakhali bus terminals showed hundreds of people, many with their families, heading out of the city.

Despite an embargo on all sorts of long-distance public transports and for-hire vehicles, they are journeying home on trucks, microbuses, cars, auto-rickshaws and motorbikes.

Many passengers said they feared the lockdown might be extended further, which was why they were leaving the capital in large numbers.

Scores of microbuses and private cars queued up in front of the bus terminals to take on board the homebound passengers.

With passenger transport on the waterways suspended, ferry terminals are seeing a huge rush of people.

Even though government-imposed restrictions have been in place, the ferry terminal of Munshiganj’s Shimulia was overcrowded with south-bound travellers.

Ferries were packed with thousands of people with health and safety protocols ignored.

“The passengers are gathering at the jetty. Whenever a ferry is arriving a chaos breaks out over boarding it,” he said.

Passengers are boarding ferries to cross the river as launches, speedboats and trawlers are all barred from operating.

Hundreds of vehicles are waiting to cross the Padma River on both ends of the terminal, said the BIWTC official.

The police have installed check-posts at several locations on the Dhaka-Mawa Highway to monitor the situation, said Additional Superintendent Sumon Dev.

Meanwhile, many people have gathered on the other end of the terminal to make their way back to capital Dhaka.

The government announced a strict countrywide shutdown on Friday, when 108 deaths were reported from coronavirus, the second highest single-day toll since the pandemic’s outbreak.

The move came after the national Covid advisory panel recommended a two-week shutdown.

Bangladesh has seen a spike in coronavirus infections and fatalities in recent weeks.

Community transmission of the deadly Delta variant of the coronavirus, first identified in India, may be the reason behind the dramatic surge in infection, the experts’ panel said on Thursday.

The death toll due to Covid-19 reached 14,053 on Saturday while the total caseload touched 883,138 with 4,334 new cases in the last 24 hours, according to the latest data by the health authorities.

Drone Identification Market to Expand with Significant CAGR by 2025