Hydrogen peroxide is the simplest form of peroxide that acts as a strong oxidizing and bleaching agent. It can be manufactured through various manufacturing processes; however, anthraquinone autoxidation is the most widely used process. Hydrogen peroxide is used in various end-use industries such as paper & pulp, chemical, mining, wastewater treatment, and electronics due to its eco-friendly applications. Inhalation of hydrogen peroxide can cause irritation of the nose, throat, and respiratory tract. Accumulation of fluid in the lungs may occur in severe cases.

However, the steady rise in demand across key end-use industries will result in promising growth opportunities for the global hydrogen peroxide market over the report’s forecast period. According to the report, the market was valued at US$ 2.44 Bn in 2016 and is likely to reach US$ 3.68 Bn by 2025, expanding at a CAGR of 4.7% between 2017 and 2025. 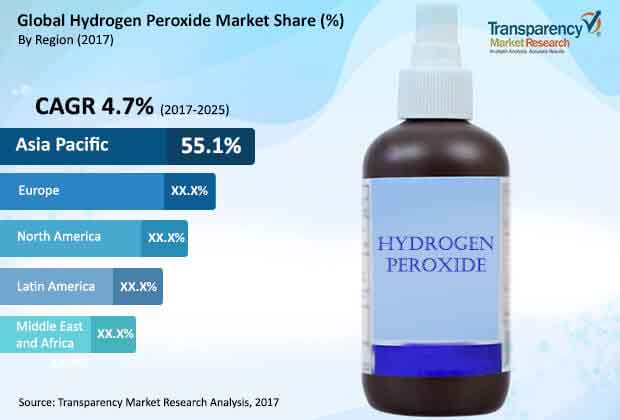