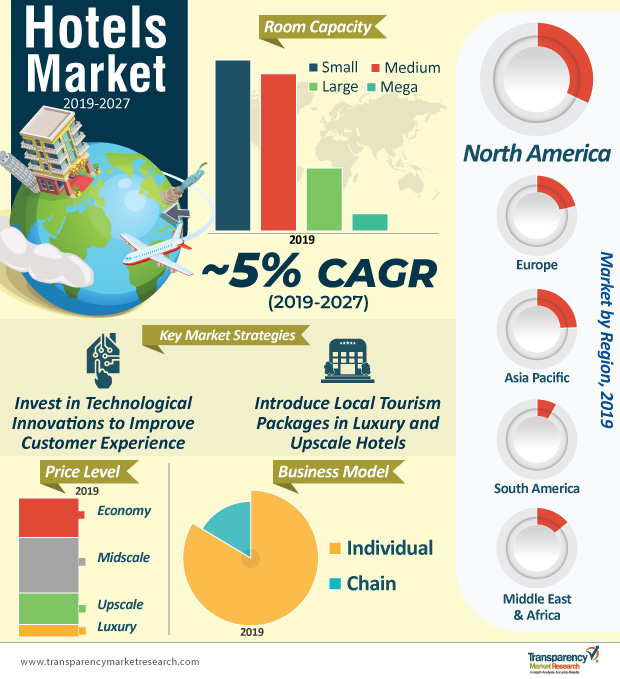 In this market report, TMR predicts that, undisrupted growth of the travel & tourism industry, particularly business-associated travels, would significantly influence the expansion of the hotels market, worldwide. Moreover, increase in the number of international events and festivals has also fueled the growth of global travel and hospitality industry. In addition to the travel & tourism industry, the hotels market is anticipated to be influenced by technological advancements. Amalgamation of technologies such as IoT and data science in hotels has provided hotels with noteworthy benefits of improved security and experience.

Despite the booming tourism sector, the hotels industry is susceptible to certain factors that could hinder its growth in the near future. The growing trend of shared accommodation services is one of the major factors that is likely to impede the growth of the hotels market during the forecast period. Shared accommodation services facilitate personalized experience at relatively lower cost, and for the hotels to provide their customers with a similar experience at such a competitive price is exceptionally challenging.

It is anticipated that, in the near future, hoteliers would enter the shared accommodation business. By adopting shared rental services, hoteliers would not only positively mitigate the threat from the growing homestay segment but also gain the opportunity to diversify their earning sources.

Although, globally, the midscale segment is likely to grow, this segment is projected to reach maturity in the U.S. The luxury segment is estimated to witness growth in the U.S.

In terms of room capacity, the medium segment holds a large share of the global hotels market, followed by the small and large segments. The dominance of the medium segment can be ascribed to its relatively higher penetration in smaller and mediocre economies. As per the report, medium room capacity hotels include 100 rooms to 300 rooms, while small hotels have 100 rooms or less. Hotels with more than 300 rooms have been considered under the large segment, and those with a capacity of 1,000 rooms have been categorized as mega hotels.

Presently, North America dominates the global hotels market, followed by Europe. The dominance of North America can be attributed to the presence of prominent hotel brands in countries such as the U.S. and Canada. The U.S. is a major hotels market across the globe, while Canada is among the rapidly growing hotels markets.

The Asia Pacific hotels market is estimated to witness prominent growth in the near future, due to rise in tourism. Japan and Hong Kong are among prominent hotels markets, while China is a key country investing in the hotel industry. Moreover, Vietnam, in recent years, has also emerged as a significant hotels market by recording robust growth in tourist arrivals.