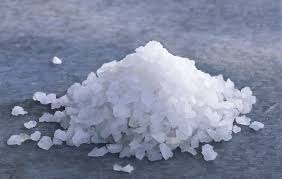 Sodium chloride (NaCl) is commonly known as salt. It occurs in the crystal form. It is used in large quantities across various industrial and consumer applications. Sodium chloride is obtained by evaporating sea water or brine by solar and vacuum evaporation methods. Additionally, it is produced by mining salt halite, which is known as rock salt. It is globally manufactured in abundant quantities to cater to the demand from various industries such as chemicals, textiles, plastics, personal care, and food & beverages.

Growth in the chemical industry has boosted the demand for chlor-alkali products such as chlorine, caustic soda, and soda ash. Commercially, salt is used as a primary source of chlorine and sodium hydroxide production, as it is extensively available and inexpensive. Chlorine is used in various industries, such as textile, plastics, agrochemicals, and chemicals, to manufacture consumer products such as papers, paints & coatings, pharmaceuticals, PVC, plastic & rubber products, insecticides, and soaps & detergents. Emerging economies in Asia Pacific such as China and India are major producers and consumers of chlor-alkali products. Growth in the chemical industry due to the rise in demand for chemicals in end-user industries is boosting the consumption of chlor-alkali. This, in turn, is fueling the demand for sodium chloride. Salt is used as flavoring agent and preservative food and beverages. The food & beverage industry accounts for large share of the sodium chloride industry. It is the third largest end-use application segment. Salt is extensively employed as a preservative in pickles and processed meats. Ions present in salt prevent the growth of fungi, thus preserving pickles and processed meat for a longer period of time. However, fluctuation in snowfall adversely affects the demand for sodium chloride in de-icing application. 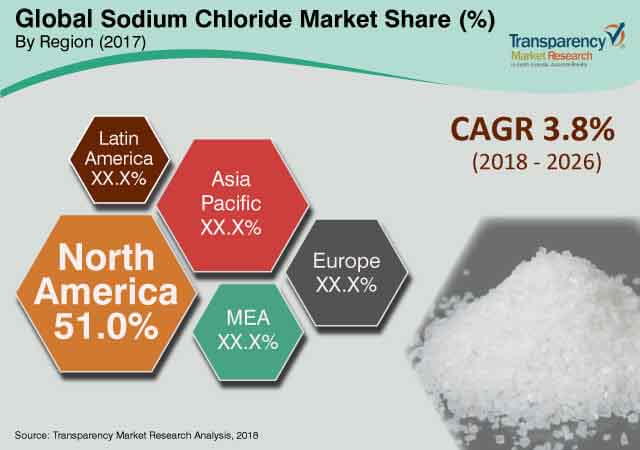 Based on grade, the global sodium chloride market has been segmented into rock salt, solar salt, and others (brine & vacuum). Others is a widely used grade of sodium chloride. Vacuum salt is obtained from the brine of the sea water. It is widely used in various applications due to the easy availability and low-cost attributes.

In terms of application, the global sodium chloride market has been segmented into chemical intermediates, de-icing, flavoring agents & food preservatives, water treatment, agriculture, and others. The chemical intermediates segment accounted for key share of the market in 2017. It is estimated to be a rapidly growing segment during the forecast period owing to the wide consumption of salt as raw material and chemical reagent.

Sodium chloride is one of the diverse chemical material used in numerous industries. It is one of the most useful naturally occurring inorganic chemicals. More commonly known as the common salt, the compound has been used prominently in food flavoring, seasoning, and preservation applications. Thus, steadily rising consumption of processed food in populations worldwide is a key driver for growth in the sodium chloride market. They also are a key material used along with other preservatives in processed meat and cheese. Aside from this, the chemical sector has been consuming sodium chloride for broad array of industries, such as plastic, paper, glass, rubber, bleaches, soaps, dyes, and detergent manufacturing. The array of applications is further expanding, propelling the growth of the sodium chloride market.

Manufacturers in the sodium chloride market have recently benefitted from some of the remarkable advances made in the production of sodium hydroxide. The unveiling of new chemistries of metallic elements has fueled research in this direction. Further, studies on the geochemistry of mineral deposits might help manufacturers and producers extract new revenue streams in coming years.