The growing application of image detection sensors in consumer electronics, automotive and healthcare sector is having a very strong influence on the growth of the global image detection sensor market. The technological advancements and the expanding application range of CMOS and CCD sensors, such as in lighting solutions and displays for tablets, PC cameras, mobile front and back cameras, and point-and-shoot cameras, are also adding substantially to the market’s progress.

Over the forthcoming years, the rising usage of image detection sensors in photography application for consumer electronics is expected to drive the growth of the market significantly. The widespread application of CMOS sensors have in smartphone cameras, thanks to the single chip integration and the relatively low price of these sensors, is also projected to benefit this market in the near future.

In 2015, the global image detection sensor market was valued at US$9.67 bn. Progressing at a CAGR of 9.60% between 2016 and 2024, the opportunity in this market is likely to reach a value of US$22.01 bn by the end of 2024. Although, the market looks flourishing at present, the declining demand of still camera may limit the demand for image detection sensors, hindering the market’s growth over the years to come. 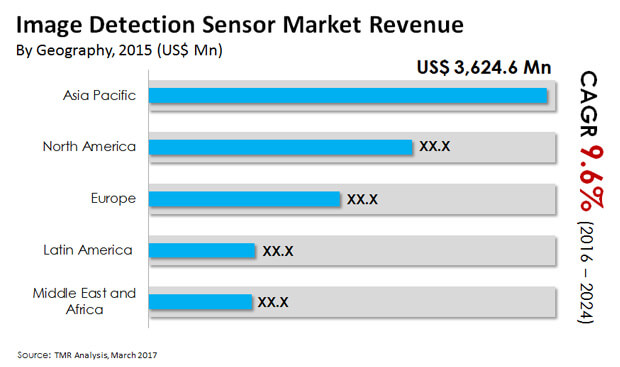 In terms of the technology, the global market for image detection sensors has been classified into thermal, charge-coupled device (CCD), and complementary metal-oxide semiconductor (CMOS). Currently, the demand for CMOS-based image sensors is higher than others. The scenario is anticipated to continue like this in the near future, thanks to the rising awareness among consumers pertaining to the advantages of CMOS, such as low power dissipation and single chip IC integration.

Apart from this, the high cost efficiency of CMOS sensors is also projected to add to their popularity significantly over the forthcoming years. Over the next few years, the increasing demand CCD sensors from the healthcare industry is likely to boost the CCD segment while the rising application of infrared cameras for industrial usage is projected to drive the demand for thermal sensor.

Asia Pacific to Remain on Top

In North America, increasing application in Internet of Things is considered as one of the prime driving factors for the market. The U.S. held the largest market share in terms of revenue owing to growing application of image detection sensors in consumer electronics, automotive and healthcare among others.

Image detection sensors are utilized in diverse array of applications, including spectrometers, machine vision cameras, microscopy, distance measurements, and range of automotive applications. Broadly, two types of sensors—CMOS and CCD—have attracted copious attention among device manufacturers and OEMs in image detection sensor market. While, seemingly there is no clear winner, the choice among the two sensor technologies depends on the required functionality, cost concerns, and fine lines that shape the technical-tradeoffs. For instance, image detection sensor based on CMOS are typically used commercially in consumer devices. High-volume demands come from smartphones and machine vision applications. These applications are notably characterized by next-gen CMOS imager fabrication processes. Over the years, advancements in the manufacturing technologies and automation have enabled companies roll out sensors with remarkably high speed and sensitivity. Over the years, the growing trend of easy-to-use driver circuits for OEMs in automotive industry has spurred new prospects in the image detection sensor market. The growth is being fuelled by the rise in demand for various types of image detection sensors in analytical instrumentation and spectroscopy applications. Growing demand for built-in CMOS IC is also expected to be a promising trend for industry players in the market. Ongoing research in CNN-based shadow detection in images are opening new applications such as in intelligence surveillance camera systems.

The aftermath of COVID-19 crisis has led to large-scale changes in business models and brought an air of uncertainty to numerous elements. In the second quarter 2020 and onward, the pandemic-led restrictions triggered numerous companies to alter the frameworks underlying product portfolios, capital expenditures (capex), production development cycle decisions, and vendors. The rise in work-from-home trends for both public and private sector organization in second quarter led major players to make overhauls related to production and supply. The demand for smart home computing devices and consumer devices raised their hopes on demand forecasts, bringing forth a scenario of optimism for manufacturers of sensors.