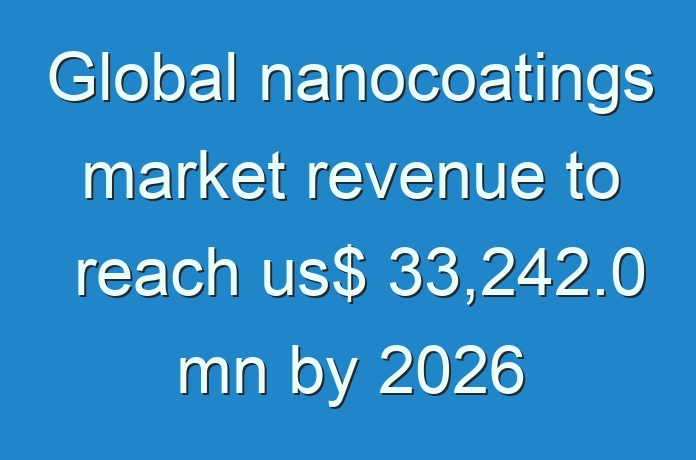 The nanocoatings market was valued at US$ 4976.2 Mn in 2017 and is anticipated to expand at a CAGR of 20.8% from 2018 to 2026, according to a new report titled ‘Nanocoatings Market: Global Industry Analysis, Size, Share, Growth, Trends, and Forecast, 2018–2026,’ published by Transparency Market Research (TMR) The global nanocoatings market is primarily driven by the high growth of end-user industries.

Nanocoatings are employed in end-user industries such as construction, energy, aerospace, marine, electronics, food & packaging, health care, and marine to protect structures from corrosion. Growth in end-user industries is boosting the demand for nanocoatings owing to their superior performance. The residential and non-residential construction sector in the U.S. expanded significantly in 2017. This trend is likely to continue during the forecast period. The residential construction sector in the U.S. experienced year-on-year growth of 10.52% and 10.58% in 2016 and 2017, respectively. The non-residential construction sector in the country expanded at a CAGR of 7.71% from 2015 to 2016. Health care, commercial, and office buildings sectors also expanded at a rapid pace during the period. The housing market in the U.S. is estimated to expand at a rapid pace behind that in India, Myanmar, and Vietnam. New York, Houston, Los Angeles, and Chicago are projected to account for 20% of the construction output in the U.S. by 2026. The average price of a house in the country is likely to reach US$ 308,000 by 2030, an increase of 75%. India is projected to have the third largest construction industry in the world by 2026. The construction industry in the country is expected to expand rapidly till 2026. The U.K is anticipated to have the sixth largest construction industry in the world and the largest construction industry in Europe by 2026. It plans to build 3.3 million houses over the next 15 years to meet the needs of its growing population.

Nanocoatings are extensively employed across various industries, as these create a strong and permanent bond between two surfaces. These materials have high shear and tensile strength. They join substances of different geometrics, sizes, and compositions. Nanocoatings prevent corrosion when coated on metals. They do not produce any deformation in materials by eliminating the metal grinding process. Nanocoatings do not produce any mechanical aggression on the substrate and avoid damage to the structure of the material. They improve flexibility in product design and esthetics. Nanocoatings provide sealing and protection against corrosion.

Hazards to Environment and Health to Hamper Market

VOC emissions that take place during the usage of nanocoatings pose a threat to the environment. Several countries have set guidelines restricting the amount of VOCs emitted during the usage of nanocoatings in industries. Manufacturing operations are bound by rules and regulations with respect to evaluation, registration, storage, usage, handling, and transportation of certain substances and their emissions, effluents, and other wastes. Violation of such regulations is expected to lead to legal obligation in future business activities.

These environmental regulations restrain the demand for nanocoatings in residential and non-residential construction. Violation of government regulations can result in heavy penalties and losses. Rapid industrialization and urbanization have increased air pollution. This affects the health of people across the globe. Several developing and developed countries are facing pressure from domestic and international regulatory bodies to formulate regulations to control VOC emission in order to reduce pollution.

Based on region, the global nanocoatings market has been segregated into North America, Europe, Asia Pacific, Middle East & Africa, and Latin America. North America led the global market in 2017. The market in North America is projected to expand due to the presence of leading manufacturers in the region. Expansion in power generation and automotive industries is likely to boost the demand for nanocoatings in North America. Asia Pacific is anticipated to be a highly attractive region in the near future, owing to the growth in automotive, electronics, and construction industries. The nanocoatings market in China has been expanding at a rapid pace, as various global manufacturers are shifting their production facilities of nanocoatings to the country. Expansion in the power generation sector in emerging economies is also driving the demand for nanocoatings in the country.

Demand for nanocoatings in Latin America and Middle East & Africa is anticipated to rise at a rapid pace during the forecast period. In terms of value, the market in these regions is estimated to expand significantly between 2018 and 2026, owing to the growth in the automotive industry, which is a major consumer of nanocoatings.

The global nanocoatings market has been segmented as follows:

Companies in the nanocoatings market have increasingly shifted gears with wide application of digital technology across the continuum, from raw material sourcing to manufacturing to generation of final output, to warehousing to final distribution operations. Among the various affects, the market is witnessing new growth economics due to thinning of line between specialty and commodity businesses that are associated with the larger ecosystem. At the same time, new growth parameters are being vigorously being debated as industry stakeholders put greater emphasis on the circular economy processes.

Your Guide to Meditation Sessions – Learn About This Age-Old Practice and Change Your...