The electric bus market is primarily driven by stringent emission norms across the globe. Rising emphasis by governments on public transport is anticipated to play an important role in the rapid expansion of the global electric bus market. Rising pollution levels in some mega cities, such as Shenzhen, London, Mexico City, Milan, Vancouver and Los Angeles, has already driven the market for electric buses significantly. Moreover, all the highly populous cities are likely to adopt electric buses to reduce greenhouse gases and other major pollutants in the environment. According to the World Health Organization (WHO), air pollution has been a major factor responsible for deaths and hospital admissions, thus the respective governments of countries in Europe are taking various steps to improve air quality, among which electrification of the automotive industry is a key step. The high price of electric buses has been a key restrain to the electric bus market; however, the price of buses has reduced due to significant reduction in the price of batteries in the last four years. Electric buses can be a value for money product in the long run, owing to lower running cost and higher lifespan of these vehicles, as compared to those vehicles that run on conventional fuels. Lower vibration from electric motors is a key factor behind the longer lifespan of electric vehicles. 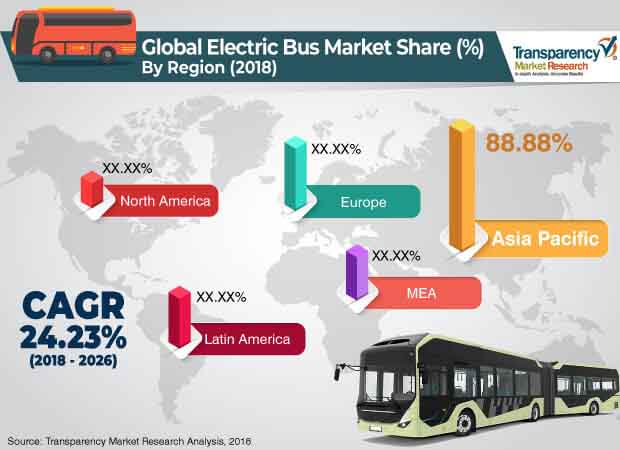 In terms of bus type, the medium bus segment held a notable share of the market in 2017. The segment is likely to expand at a remarkable pace during the forecast period owing to medium buses possessing the precise length suitable for transit bus service. Furthermore, high seating capacity bus segment is likely to expand at a rapid pace during the forecast period as the high seating capacity buses are the most effective solution to contribute maximum for reducing the air pollution with optimum use power generated within the powertrain. Moreover, high seating capacity buses are of 18 m or 24m in length and are primarily gaining popularity in Europe and Americas.

In terms of battery, Lithium Iron Phosphorus battery is used in highest quantity. The lithium iron phosphate battery is preferably used in medium and large buses due to its excellent thermal stability, long lifespan, and faster charging time, as compared to that of the conventional lithium ion battery. Other battery types, such as lithium titanate and nickel manganese cobalt, are preferably utilized by some manufacturers in their light and medium buses, thus the lithium titanate and nickel manganese cobalt are anticipated to witness considerable expansion during the forecast period. Furthermore, various researches are being carried out on autonomous electric buses; however, the arrival of autonomous electric buses is expected after 2021, with limited production.

Physical Access Control System (PACS) Market to Expand at a Healthy CAGR of 9%...