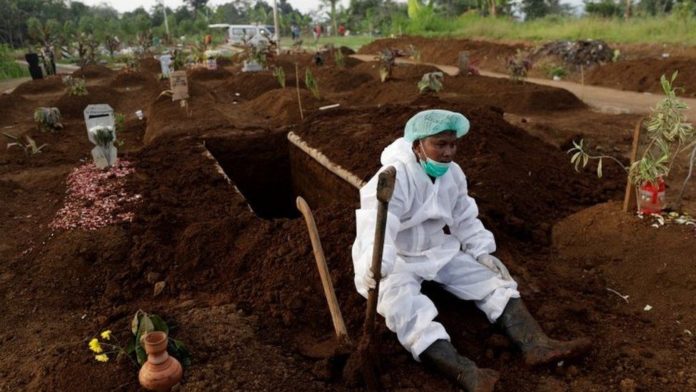 The World Health Organization (WHO) has called for a suspension on booster vaccines for Covid-19 until at least the end of September.

WHO Chief Dr Tedros Adhanom Ghebreyesus said a pause would allow for at least 10% of the population in every country to be vaccinated.

A number of nations including Israel and Germany have announced plans to administer a third dose.

But Dr Tedros has warned poorer nations are falling behind.

According to the WHO, low-income countries have only been able to administer 1.5 doses for every 100 people due to a lack of supply.

Dr Tedros said that there needs to be a reversal and that the majority of vaccines should go to lower income countries.

“I understand the concern of all governments to protect their people from the Delta variant. But we cannot accept countries that have already used most of the global supply of vaccines using even more of it,” he added.

It is a strong call from the WHO, as the agency attempts to narrow the gap between high-income and low-income nations.

It had wanted 10% of people in every country to be vaccinated by next month, but that target is unlikely to be met on the current trajectory.

In Haiti and the Democratic Republic of Congo, none of the population has received two doses of the vaccine.

Indonesia, which has seen infections and deaths spike in recent months due to the Delta variant, has only fully vaccinated 7.9% of its population, according to Our World in Data.

How many vaccines are rich countries sharing?
Will countries be left behind in the vaccine race?

Meanwhile Israel began rolling out a booster shot for the over 60s, while Germany announced on Tuesday that it would start offering third doses of the Moderna and Pfizer vaccines. In the UK, millions of people classed as vulnerable could be offered a booster from September.

The US has not announced a policy on booster vaccinations but the White House said on Wednesday that it has enough doses to distribute vaccines abroad while also ensuring Americans can be fully vaccinated.

“We definitely feel like it’s a false choice and we can do both,” White House Press Secretary Jen Psaki said.

This is not the first time that Dr Tedros has called on richer nations to donate vaccine supplies to low-income countries.

In May, he called on wealthier nations to postpone plans to give children and teenagers vaccines and instead donate those supplies.

Dr Tedros urged countries to supply more vaccines to the global fair-access scheme Covax. However a number of countries, including the UK, are pressing ahead with plans to vaccinate children and teenagers.

This information is regularly updated but may not reflect the latest totals for each country. Total vaccinations refers to the number of doses given, not the number of people vaccinated. It is possible to have more than 100 doses per 100 population as some vaccines require two doses per person.

Rising Demand From End-Users For Lightweight And Durable Truck Tool Boxes Is Anticipated To...