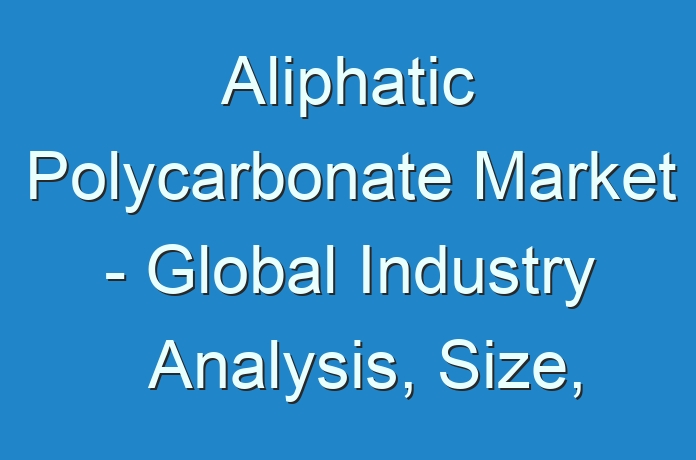 Polycarbonate is a polymer that possesses repeating carbonate backbone (-O-C(O)-O-) in its structure. It is a strong material that is available in various grades; some of them are optically transparent. Beneficial properties of polycarbonate include easy workability, molding, and thermoforming. As a result, it is used in a large number of applications across various end-user industries. Polycarbonate falls between the categories of commodity plastics and engineered plastics due to its features such as resistance to temperature and impact coupled with optical properties.

Developments in polymerization techniques have been carried out in order to overcome the limitation of Aliphatic polycarbonate (APC) being conventionally utilized as low molecular weight (LMW) oligomeric intermediates for its copolymerization with other polymers. Recent innovations in the APCs market have made possible to cross the limitations in the synthesis of high molecular weight (HMW) APCs. Furthermore, utilization of other new monomers in the synthesis process of APCs has allowed the production of a variety of aliphatic polycarbonates with different chemical compositions and structures.

Aliphatic Polycarbonates were initially recommended as alternative materials for packaging, films, and rigid plastics applications. However, their industrial applications are currently limited to their usage as intermediates in the production of LMW polycarbonate polyols and as macro-monomers in the synthesis of polyurethane and other polymers.

Production of Aliphatic polycarbonate (APC) is carried out by processes such as poly-condensation process between aliphatic polyol with dialkyl carbonate; copolymerization of carbon dioxide with epoxides; and ring-opening polymerization (ROP) of cyclic carbonate monomers. Substantial advancements have been carried out to develop each technique over the last two decades.

Early research in Aliphatic polycarbonate (APC) primarily focused on improvement of thermal stability and mechanical properties of poly(trimethylene carbonate). The research consisted of its blending with polymers having complementary properties to poly(trimethylene carbonate) in order to synthesize engineering thermoplastics. However, the study encountered limited commercial success.

Recent developments in the research toward the improvement of APCs include utilization of carbon dioxide in materials in order to lower greenhouse gases, as well as to compensate to the shortage in the supply of conventional petroleum fuel. Use of CO2 in the process has been encouraged by the rise in concerns regarding greenhouse gas pollution from CO2. Production of APCs from CO2 as primary carbon source is an attractive opportunity for the Aliphatic Polycarbonate Market as carbon footprint in the environment is increasing exponentially. This method can help save resources. Furthermore, products formed through this method can be biocompatible and biodegradable. Thus, APCs could be suitable for a wide range of applications in construction and biomedical purposes.

Currently, the production of Aliphatic polycarbonate (APC) is on a small scale. They are primarily used as toughening agents in adhesives, as binders in ceramic compositions and metallic pastes, and in modification of polyolefin resins. Addition of APCs to polyolefins can achieve high strength and stretchability under high-speed stretching, which enhances their impact resistance. Other applications of Aliphatic polycarbonate (APC) include biodegradable plastics (starch/PPC blends), thick film pastes, and 3D printing of ceramics.

Companies in the Aliphatic Polycarbonate market have increasingly shifted gears with wide application of digital technology across the continuum, from raw material sourcing to manufacturing to generation of final output, to warehousing to final distribution operations. Among the various affects, the market is witnessing new growth economics due to thinning of line between specialty and commodity businesses that are associated with the larger ecosystem. At the same time, new growth parameters are being vigorously being debated as industry stakeholders put greater emphasis on the circular economy processes.

Enterprise Media Gateway Market is expected to reach US$ 2.37 Billion

Life Science Reagents Market is Projected to Expand at a CAGR of nearly 8%...