Airlines have been increasingly focusing on adoption of self-service solutions, in a bid to offer convenience to passengers, thereby making airport kiosks to gain a paramount importance over the years. Growing airport kiosk installations has helped passengers in avoiding standing in long queues as well as delays at airports. The airport kiosks have enabled airport authorities to scrupulously manage increasing airline passenger traffic, mainly because they are equipped with in-built features, which enable effective expedition and control over check-in, passenger clearance, and the baggage clearance. The proliferating IT spending across airports has further underpinned adoption of airport kiosks. The advent of privatization has promoted several companies in revamping airport facilities with the modern infrastructure. Additionally, airlines are making enormous investments in personalizing passengers’ journey, consequently augmenting demand for highly advanced airport kiosks. With the emergence of innovative mobile technologies, passengers have been provided with services that are similar to those offered by airport kiosks. Smartphones and tablets-compatible mobile technologies deliver tasks performed by airport kiosks at reduced cost, which in turn is expected to prevail as a factor curbing airport kiosk adoption to a certain extent. 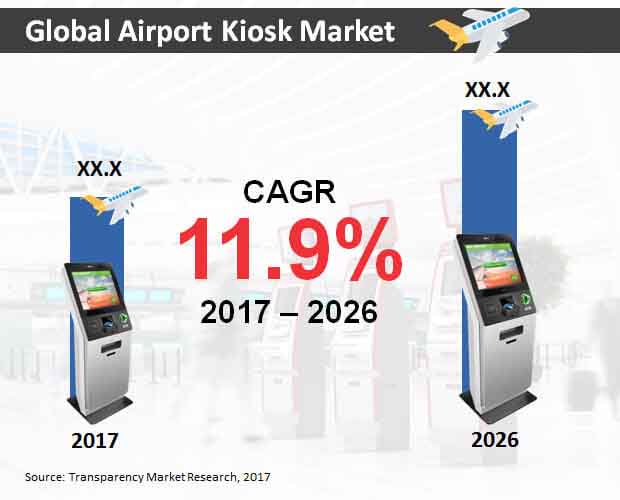 Transparency Market Research has projected the global airport kiosk market to register a splendid 11.5% CAGR during the forecast period (2017-2026), in terms of volume. Revenues from worldwide sales of airport kiosks will reach approximately US$ 3,500 Mn by 2026-end.

Robust investment by airlines in advancing facilities is expected to bolster demand for airport kiosks in Europe. The market in Europe will further gain an impetus from increasing spending on airport construction throughout the region. Europe will therefore remain the leading revenue contributor to the global airport kiosk market. North America will retain its position of being the second largest market for airport kiosk during the forecast period. According to TMR’s report, sales of airport kiosks in North America will register a CAGR of 11.4% in terms of volume through 2026.

Based on type, baggage check-in kiosks will continue to lead the global airport kiosk market, in terms of value. However, revenues from automated passport control kiosks are slated to reflect a relatively faster expansion, to become the second most sought-after type of airport kiosk across the globe by 2026-end.

By nature, global airport kiosk market is moderately fragmented, on account of the occupancy of few players positioned at different parts of the globe, as observed by TMR’s recent report. Since the recent past, installations of airport kiosks have significantly spurred for offering air passengers with higher flexibility and convenience. Leading companies concentrating on innovations and new product development, while capitalizing on rising demand, will have good future expansion prospects in the global airport kiosk market. Key companies tracked by the report, which support the market expansion include Bolloré SA, Fujitsu Limited, Diebold Nixdorf AG, Embross Group, Toshiba Corporation, NCR Corporation, Rockwell Collins, Inc., and SITA SA.

Disaster Recovery as a Service (DRaaS) Market will exhibit an exponential 35.7% CAGR over...