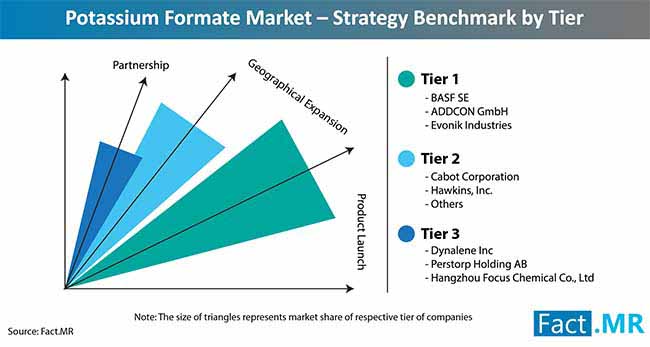 Estimated to witness moderate rise over 2018, the global potassium formate consumption volume is envisaged to reach ~650 KT in 2019. Fact.MR conveys indispensable insights on the potassium formate market in its recently published report that projects a steady volume growth outlook for the market.

The present development trend of the potassium formate market remains highly influenced by an expanding number of industrial applications and increasing demand for efficient de-icers and drilling fluids, across the globe.

Market breakdown by delivery form and by application reveals that Europe, coupled with North America, currently accounts for a sizeable revenue share in the global potassium formate market. The former however holds a fourth of the global market value, according to Fact.MR’s findings.

The market attractiveness of East Asia-South Asia-Oceania cluster has been estimated to grow at a healthy rate over the period of next few years, assessing the increasing applicability of potassium formate in drilling and heat transfer fluids.

North America is projected to hold promising growth potential for potassium formate market. While the market in this region is expected to benefit from visibly increasing de-icing operational activities in snow prone airports in the region, it will also remain influenced by the growing preference of manufacturers for potassium formate over other de-icing salts, such as potassium acetate, and sodium formate, among others.

The demand for de-icing salts is predominantly influenced by the winters in the Western Region. Countries, such as the U.S., Canada, and Russia are amongst those that experience heavy snow fall, for instance, the winter of 2017-2018 was higher than expected leading to repeated incidents of snow and sleet, leading to the mobilization of snow fighters from coast-to-coast.

Harsh weather conditions across the country were experienced with freezing temperatures and snow storms inflicting havoc on our roads. The same trend was also experienced at airports. The report opines that this further drives the demand for de-icing salts, which are used at almost every airport throughout North America and Europe.

Potassium formate consumption in drilling applications currently accounts for a third of the global market revenues, as indicated by the report. Likewise, potassium formate applications in drilling fluids are expected to grow significantly during the forecast period, which can be attributed to the continued preference of consumers, for customized service and maintenance.

Rising demand for superior industrial de-icers for the clearance of large scale snow from runways over conventional techniques from bull dozers and other machinery means has made lucrative opportunities for potassium formate during the forecast period.

Increasing demand for potassium formate in the solid as well as liquid forms has been witnessing rise in demand as an anti-corrosion agent and a competent de-icing material at airports.

The critical use of potassium formate here has been the de-icing of runways as potassium its quickly penetrates snow and ice layers when mixed with corrosion inhibitors and other additives, detaching the snow from the concrete and melting it at a rapid pace.

Connect To an Expert https://www.factmr.com/connectus/sample?flag=AE&rep_id=3851

Oscilloscope Market Across The Globe Is Expected To Show A Substantial Growth With A...