Home Business Rubber Transmission Belts Market is set to Reach US$ 7 Bn by...

Power transmission belts are made from low-modulus materials. These materials include leather, rubber, fiber/cotton, and balata. Rubber transmission belts are attached in the form of a loop, which mechanically connects two shafts for transmitting power smoothly. These belts generate power for various applications such as farming, mills, machinery, and automotive. Currently, with the advent of industrial revolution, machines are becoming more complex and sophisticated. There has always been a need to efficiently transmit mechanical power between different parts of machines. 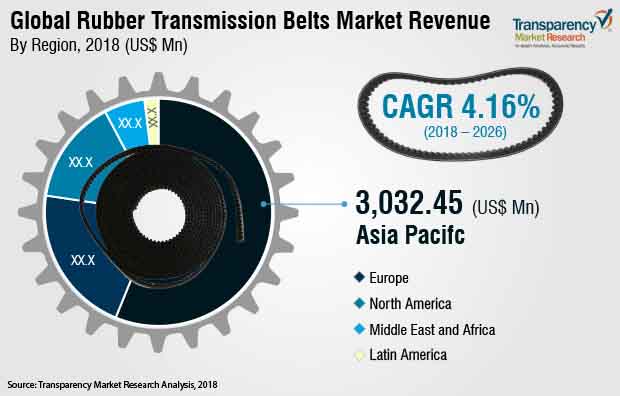 The global rubber transmission belts market has been segmented based on product, application, and geography. Based on product, the market has been classified into raw edged belts, V-belts, timing belts, wrapped belts, specialty belts, and others. The V-belts segment accounts for a major share of the rubber transmission belts market. V-belts include traditional classic belts, narrow-profile belts, and double V-belts. However, all V-belts do not perform the same function. These belts are employed depending on application and objective. Wrapped belts are V-belts wrapped by cotton or polyester. Timing belts are mostly employed to internal combustion engines. Raw edged belts are produced by slicing individual belts from rubber sleeves. Specialty belts are often designed for use in particular applications and thus, they are customized belts.