According to a new market research report published by Transparency Market Research  titled ‘Rocket & Missile Market – Global Industry Analysis, Size, Share, Growth, Trends, and Forecast, 2019–2027,’ the global rocket & missile market is projected to expand at a CAGR of 3.6% during the forecast period. According to the report, the global market would continue to be influenced by a range of macroeconomic and defense-security-specific factors in the near future. 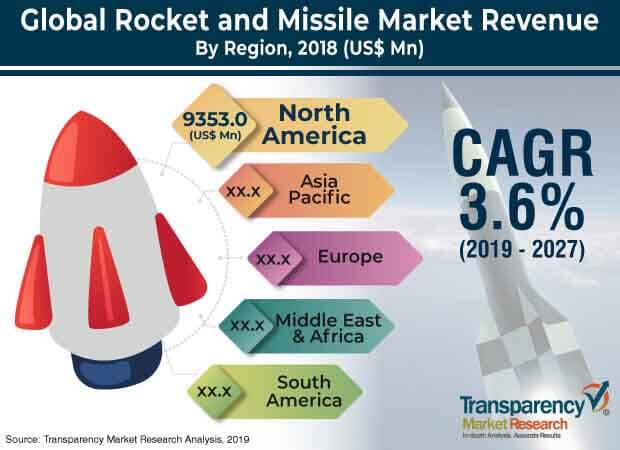 The market in North America is expected to expand at a prominent CAGR during the forecast period. Increase in the defense expenditure, presence of a large number of market players, and high awareness about advanced technologies in North America are fueling the market in the region. Demand for rockets and missiles in North America is likely to remain concentrated in the U.S., owing to the increasing demand from defense forces to strengthen the national security, consistent increase in the production of rockets and missiles, and significant investments in R&D activities in the country. Furthermore, the market in Asia Pacific is anticipated to expand at a CAGR of 4.7% from 2019 to 2027. Demand for rockets and missiles in Asia Pacific is expected to rise during the forecast period, due to increasing demand in defense forces of countries in the region. Additionally, the concept of developing hypersonic cruise missiles is expected to gain traction in various countries during the forecast period. This factor is projected to act as a market driver during the latter half of the forecast period.

In Middle East & Africa (MEA), market players are increasing their investments to expand their presence. The market in GCC is expected to expand at a significant CAGR during the forecast period, owing to investments in the development and procurement of rocket and missile technologies by these countries. In South America, Brazil is expected to hold a major market share throughout the forecast period.

Strategic Analysis of the Global Shaker Bags Market, Forecast to 2030