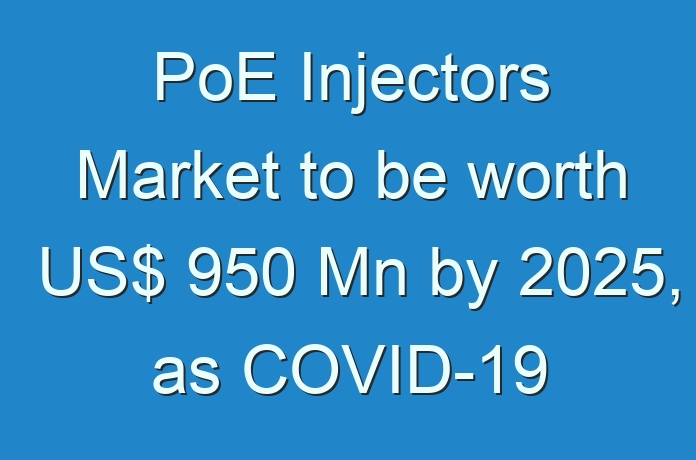 Ethernet based communication and Internet Protocol/Transmission control protocol (IP/TCP) is emerging at all levels of mass communication. The introduction of PoE (Power over Ethernet) is expected to transform industrial-based networking systems. Majority of the installed wireless Local Area Network (LAN) and VoIP telephones are already equipped to receive power via Ethernet connection. Wireless LAN access points, VoIP protocols, remote security cameras, and fire alarms are some of the devices which are used in industrial-based networking systems.

Increasing demand for fast and cost-effective communication owing to growing number of internet users is expected to drive the Power over Ethernet (PoE) market over the forecast period. Growing demand for VoIP services are fundamental factors boosting the IP Telephony and PoE injector market over the forecast time frame. Most of the prominent IP telephony solution providers are based in developed countries, having presence in developing countries as well. North America region held the dominant market share for IP telephony followed closely by Asia Pacific. Multiple VoIP solutions and services based in Europe are offering advanced feature-rich UCaaS (Unified communications as a service) services.

Want to know the obstructions to your company’s growth in future? Request a brochure @ https://www.transparencymarketresearch.com/sample/sample.php?flag=S&rep_id=30824 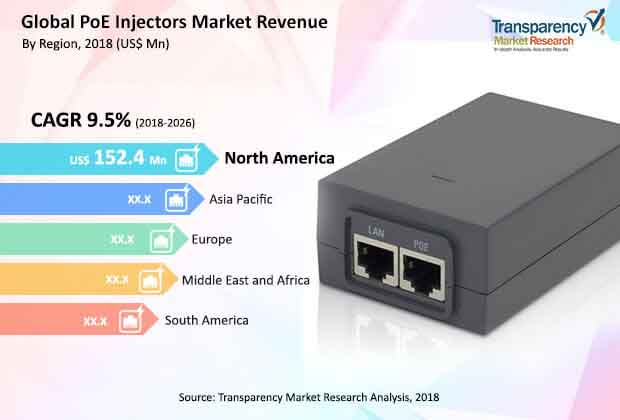 Demand for resilient and secure infrastructure is crucial as governments and private organizations are also looking for advanced technologies for improved security. Continuous investments in infrastructure such as railways, roads, airports, and communication networks are fuelling the demand for video surveillance and VSaaS solutions, thereby boosting the PoE injectors market. Burgeoning modern retail outlets and hospitality sector is expected to increase the demand for CCTV cameras during the forecast timeline. Surveillance is an important task in order to prevent shoplifting and also to keep a tab on other activities of attendants and customers in each sector, thereby indirectly fueling the PoE injector market.

The Institute of Electrical and Electronics Engineers (IEEE) is responsible for maintaining and creating PoE standards. IEEE 802.3af standard supports the power delivery over Ethernet up to 15.4W per port which is used to deliver the power on a variety of devices. Out of 15.4W, only 12.95W is available for powered devices as some of the power is being dissipated into cables as overheads. The IEEE 802.3at (PoE+) standard can support up to 25.5W of the power on the ports, which require more than 15.4W power when connected to PoE+ ports.

As the utility of PoE has expanded beyond the networking sector, the new IEEE standard 802.3BT or PoE++ was adopted in early 2017. This standard will utilize all four twisted pairs for transmitting power. This standard will be able to achieve 49-70 Watts which will be used specifically for outdoor applications. By this standard, the new PoE injectors will be able to support Point of Sale (POS) systems, high powered PTZ cameras, and IP turrets used by financial traders, among many other applications. This new standard will allow for higher power along with supporting 10 Gbps connections.

Integrated PoE solutions helps gain consumer satisfaction and trust by fulfilling requirements such as usage of latest technology, integrated high voltage power supply etc. Availability of integrated high voltage power supply in PoE injector devices provides a great opportunity to the market to expand in future. If PoE devices are well equipped with integrated power supply, it allows the manufacturers to maintain a good position in a competitive environment. In response to the same, IEEE has defined the 802.3BT standards in order to support high power requirements of devices.

Lighting control is expected to offer extensive growth opportunities as applications such as smart lights incorporate the use of internet and require electrical power to function. Infotainment segment is also expected to witness high growth prospects as newer IoT based devices are being introduced in the market.

Asia Pacific is expected to have high growth prospects as IoT adoption is significantly increasing in this region. Internet penetration rate is highest in North America (88.1%), followed by Europe (80.2%). Asia Pacific still holds prominent growth prospects as the penetration rate is 57.8% which is lowest as compared to the Middle East and South America.