The degree of competition is considerably high among the existing vendors in the Canada hosted PBX market. Furthermore, the market exhibits considerable opportunities for the new players to venture in. Considering such high potential for the entry of new players, the hosted PBX market in Canada will witness intensified competition in the near future, prophesized Transparency Market Research (TMR) in a new study.

The vendors in the market are competing through strategic collaborations and even partnerships. Currently, Allstream, Inc., Telus Communications, Bell Canada, Cisco System, Microsoft Corporation, and Mitel Networks Corporation hold dominance in the Canada hosted PBX market. These companies held nearly 54% of the Canada hosted PBX market in 2016. Besides forging new partnerships, these companies are also working towards expanding their offerings to gain competitive advantage. As these strategies are forecast to reflect positively on any company’s overall proceeds, they can considerably influence the market’s trajectory as well.

According to TMR, the hosted PBX market in Canada will rise at a whopping 18.2% between 2017 and 2025. At this pace, the market will reach US$1.75 bn by the end of 2025, from its valuation of US$398.6 mn in 2016. By application, telecom & IT and BFSI emerged as the two leading segments in the market. Of these, telecom & IT held dominance with a share of just over 20% in the market in 2016.  By enterprise size, large enterprises left behind SMEs to emerge as the market lead. By the end of 2017, it is expected to hold over 68.7% of the Canada hosted PBX market based on value. 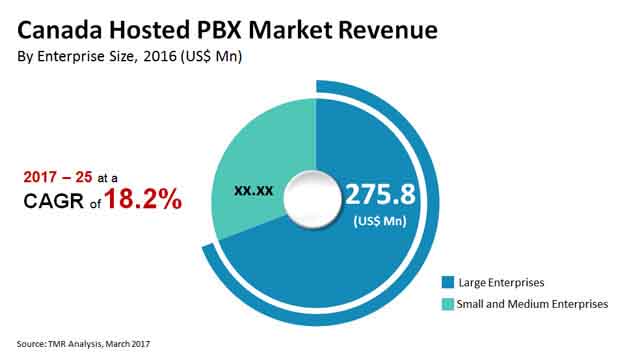 The hosted PBX market in Canada is primarily gaining from the country’s progress in deploying wireless services. “With the government pulling up its stock to make Canada a leading digital nation by the end of 2017, there could be no dearth of opportunities for the hosted PBX market.” said a lead TMR analyst. Considering this target, the government has adopted several initiatives to provide high-quality spectrum to help wireless service providers ensure improved standard of services.

Integrating the latest technologies is therefore a key aspect observed by organizations across Canada. Among the latest technologies to have forayed in Canada in the last few years, adoption of IP based services have left a lasting impact. The adoption of voice over internet protocol (VoIP) has therefore gained pace in the country. As the hosted PBX technology works on the basis of VoIP, which enables PBX to connect with smartphones, personal computer, and other technologies, proliferation of VoIP will mean lucrative opportunities for the expansion of the hosted PBX market in Canada.