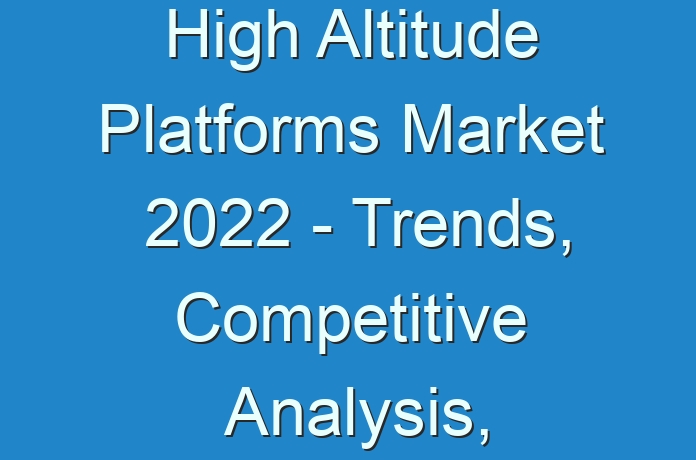 High altitude platforms (HAPs) are objects stationed at a height of more than 50,000 feet from Earth’s surface. HAPs are commonly deployed in the stratospheric layer, far higher than the altitude at which commercial aircraft operate. Thus, HAPs are capable of covering large surface areas and can be used for maritime and land-based applications. These platforms are used for various applications, such as communication systems, persistent surveillance, and navigation. Apart from these, HAPs are also used for applications such as aerial imaging, environmental monitoring, and Internet services. HAPs are often referred to as alternatives to satellite systems due to their capacity of fulfilling similar purposes.

The most significant factor augmenting the HAP market’s growth is their competitive advantage over satellite systems. HAPs require much lower expenses for system deployment and operation than satellite systems. Additionally, the payloads attached to HAPs are also compatible with the existing infrastructure, which makes them preferable to satellite systems. These systems have shorter turn-around times than satellite systems due to their proximity to Earth’s surface in comparison with satellites. Furthermore, the market for HAPs is significantly driven by the increasing defense expenditure of major countries worldwide. Government & defense is the largest segment of this market in terms of revenue and adoption. Thus, growing expenditure on surveillance systems is expected to significantly spur the market’s growth in the coming years.

The market for HAPs is also driven by the growing penetration of Internet services worldwide. HAPs are increasingly being used to deliver wireless Internet services, which are further expected to witness substantial growth in the coming years. One of the most prominent instances is Project Loon by Google, Inc., which aims to provide Internet services through aerostat systems (balloons) deployed in the stratosphere. Nevertheless, the HAPs market faces some of the challenges related to the costs and operational difficulties. Although much less so than the market for satellite systems, the market for HAPs is significantly hampered by the high initial and operating costs of UAV aircraft. This makes these systems inaccessible to countries with low defense budgets. Furthermore, aerostat systems and airships pose operational challenges such as extremely slow deployment, difficult handling, and restriction on payload weight.

The global HAPs market is segmented into type of platforms, payload, application, and geographic regions. On the basis of platform type, the market is segmented into airships, UAV aircraft, and tethered aerostat systems. In 2018, the UAV aircraft segment accounted for the largest share, in terms of revenue, of the global HAPs market. This was due to high cost of the aircraft (resulting in higher revenue per unit) coupled with strong adoption from countries such as the U.S., China, Russia, and France. However, the tethered aerostat systems segment is estimated to witness high demand during the forecast period because of advantages that include low costs, easy upgrading, and low maintenance offered by these platforms over UAV aircrafts. On the basis of payloads, the global HAPs market is segmented into communication, surveillance systems, EO/IR systems, and navigation. The global market for HAPs was dominated by the communication segment in 2018. Communication is the most integral payload, making it the largest segment globally. Furthermore, the communication segment is predicted to hold its dominant position throughout the forecast period due to ongoing prospects for HAP-based wireless communication across different regions.

In 2018, North America accounted for the largest share, of over 31%, in terms of revenue, of the global HAPs market. This is due to the high penetration of UAV aircraft in the region. However, the global HAPs market is estimated to witness the highest growth in Asia Pacific during the forecast period. This is due to the rapidly increasing adoption of UAV aircrafts and aerostat systems in China, India, South Korea, and Southeast Asia.

Stuck in a neck-to-neck competition with other brands? Request a custom report on High Altitude Platforms Market

Manufacturers in the global high altitude platforms market include