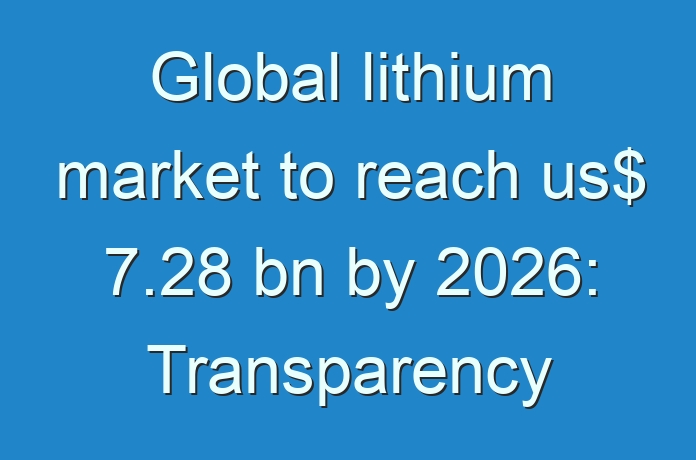 Increase in sales of electric vehicles including hybrid electric vehicles (HEVs), plug-in hybrid electric vehicles (PHEVs) and pure battery electric vehicles (BEVs) is anticipated to fuel the demand for lithium batteries and thereby, lithium during the forecast period. Low weight and high energy density are major properties of lithium responsible for its use in battery applications. Increase in government funding for research and development activities for energy storage applications is likely to augment the demand for lithium in the next few years. The U.S. government has granted US$ 2 Bn to accelerate the development and manufacture of next-generation electric vehicles. Increasing use of lithium in mobile phones, cordless power tools, laptops, and high-tech devices is anticipated to drive the global lithium market during the forecast period.

Use of lithium in air treatment applications such as cooling, dehumidification, and air regeneration is on the rise. Rising use of absorption chillers in hospitals, shopping malls, and other institutional facilities is likely to drive the global lithium market in the near future, as lithium bromide is primarily used in these applications. Increasing use of lithium chloride for dehumidification is another factor driving the lithium market. Gelatin manufacturers, pharmaceutical companies, breweries, and hospitals employ typical installations wherein lithium is used for the dehumidification purpose. Demand for lithium for use in air regeneration is also increasing. Lithium is used for removal of carbon dioxide in space vehicles, sub-marines, miners, and safety devices.

Benefits such as small size, low weight, high power, long life cycle, and high voltages are propelling the demand for lithium for use in medical device applications. Alkyl lithium chemicals are used as synthetic agents in the manufacture of organic intermediates for drugs and agricultural chemicals. Use of lithium in the treatment of bipolar disorder is also on the rise. Lithium salts are helpful in mental disorders such as schizoaffective disorder and cyclic major depression. Primary lithium batteries have been used for implantable devices such as cardiac pacemakers, drug pumps, neurostimulators, and cardiac defibrillators.

Careless disposal of lithium batteries is likely to lead to release of lithium into the environment. This lithium, in turn, reaches the food chain. Lithium content inside the human body is toxic in nature. This factor is likely to restrain the lithium market to a certain extent in the next few years. Lithium-ion batteries are subject to aging and they need to be stored in a cool place to reduce the aging effect. Transportation of lithium by air, rail or road has to clear several safety tests and the regulations on transportation of large quantities of lithium vary across the countries

In terms of consumption, Asia Pacific accounted for a major share of the global lithium market in 2017. Asia Pacific has emerged as a hub for manufacture and exports of chemicals and materials over the last few years, with significant consumption of lithium being witnessed by China and South Korea. This has prompted various world-leading companies to strengthen their position in the market in Asia Pacific. Manufacturers such as SQM, Albermarle Corporation, FMC Corporation, and Talison Lithium are leading players operating in the global lithium market.

Rapid industrialization and high degree of competition among established players

Key players profiled in the report include SQM, Albermarle Corporation, FMC Corporation, Talison Lithium, Tianqi Lithium Corporation, Jiangxi Gangfeng Lithium, Orocorbe Limited Pty Ltd, and Neometals. Manufacturers’ strategy of expansion in developing economies is likely to strengthen their business operations as well as their position in the global lithium market in the next few years. Several manufacturers are engaged in the production of lithium in order to meet the demand from applications such as energy storage, glasses & ceramics, and greases & lubricants.

Companies in the Lithium market have increasingly shifted gears with wide application of digital technology across the continuum, from raw material sourcing to manufacturing to generation of final output, to warehousing to final distribution operations. Among the various affects, the market is witnessing new growth economics due to thinning of line between specialty and commodity businesses that are associated with the larger ecosystem. At the same time, new growth parameters are being vigorously being debated as industry stakeholders put greater emphasis on the circular economy processes.