Knnit
Home Business Computer Graphics Market An Objective Assessment Of The Trajectory Of The... 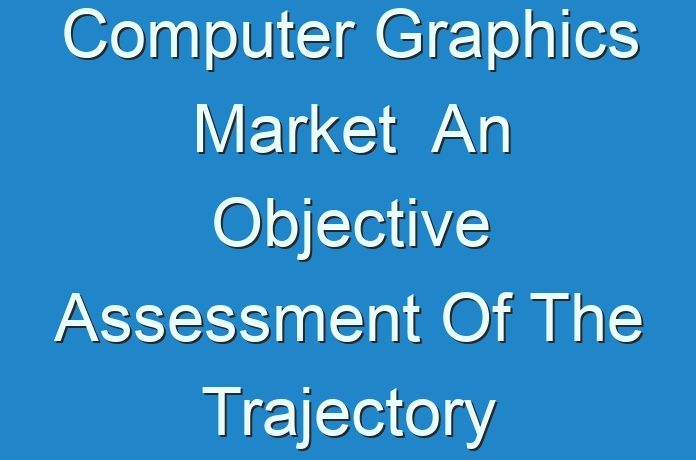 In the current day and age, due to advancements in digital technologies and high adoption of electronic devices, computer graphics have gradually gained considerable attention over the past couple of decades. In addition, evolving consumer trends and growing demand for improved graphical representation of characters, objects, etc. in films, animated movies, and among others, has accelerated innovations in the computer graphics market over the past decade– a trend that is expected to continue during the forecast period. Another factor that is likely to play a key role in boosting the overall prospects of the global computer graphics market is the surge in the number of smartphone, tablet, and computer users across the world, particularly in the Asia Pacific region.

The growing dependency on computers in practically all the core industrial domains, including automotive, building & construction, aerospace, defense, packaging, oil & gas is expected to provide abundant opportunities for players operating in the current computer graphics landscape during the assessment period. Advancements in computer programming and widening applications of computer graphics are projected to lay a solid foundation for market growth in the upcoming years. The demand for both, interactive as well as non-interactive computer graphics has witnessed consistent growth over the past few years and as per current estimates, the trend is expected to continue in the forthcoming years.

At the back of these factors, the global computer graphics market is expected attain a market value of US$ 308.6 Bn by the end of 2030.

At present, computer-generated imagery (CGI) is increasingly being used to develop animated visual content in sci-fi movies, animated films, games, etc. The advent of 3D computer graphics has played an essential role in revolutionizing the computer graphics market, which has entered a new era. Computer graphics is extensively used in an array of applications across the film making sector such as character creation, adding special effects, etc. Advancements in computer hardware is another major factor that is expected to augment the demand for computer graphics in the entertainment sector to create production-ready imagery models.

In addition, as computer graphics are comparatively more cost-effective than creating real physical effects, the demand for computer graphics is projected to witness a substantial growth during the forecast period.

Demand for Computer Graphics Likely to Grow amid COVID-19 Pandemic

The demand for computer graphics is expected to witness steady growth amid the ongoing novel COVID-19 pandemic. Due to stringent lockdowns imposed by governments as a measure to restrict the transmission of the novel coronavirus, commercial spaces, corporate offices, recreational centers, and other facilities have remained shut for a majority of the year 2020 around the world due to which, online traffic has witnessed an unprecedented surge in the first two quarters of 2020. Furthermore, online gaming has received tremendous boost amid the ongoing COVID-19 pandemic due to which, game developers are under considerable pressure to improve the visual content of their games– a factor that is expected to boost the expansion of the computer graphics market amid the ongoing pandemic. In addition, surge in the consumption of online content on OTT platforms is another factor that is anticipated to boost the overall prospects of the global computer graphics market during the COVID-19 era.

Stuck in a neck-to-neck competition with other brands? Request a custom report on Computer Graphics Market

TMR’s solid presence in the market research space comprising an expert team of researchers makes for its exemplar solutions and strong relationships with clients for several years. The practice to deep dive and understand the dynamics of a business sector for market research solutions makes us stand apart. The ubiquity of information technology that provides frameworks for end-to-end business operations today, with the added support of 4G and 5G telecom networks that has led to double-digit growth rate of the IT &Telecom sector are well covered in our reports.

Pd1 And Pdl1 Inhibitors Market : Technological Growth Map over Time to Understand the...